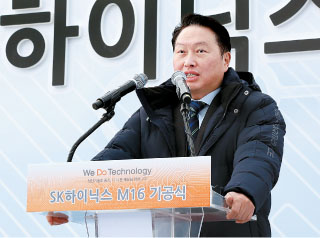 The new facility, dubbed M16, is the company’s seventh semiconductor production line and the third inside its complex in Icheon, Gyeonggi, where its headquarters is located. Construction will take place on 53,000 square meters (30 acres) of land and is expected to be finished in October 2020. State-of-art equipment will be installed on the site.

SK didn’t disclose exact figures for the project’s costs, but the budget is estimated at 15 trillion won ($13.3 billion), including 3.5 trillion won for construction.

Whether the new line will manufacture NAND or DRAM memory chips is yet to be decided. SK explained that the type of chip made at the factory will be determined based on the future market and the company’s technology achievements by the time construction is finished. The two existing lines - M10 and M14 - in Icheon manufacture both NAND and DRAM.

“SK Hynix has built a success story after passing through difficult times,” said Chairman Chey Tae-won at an internal event held at the Icheon headquarters on Wednesday. He asked employees to “write a new success story by adding hard work to M16’s state-of-the-art hardware.”

After years of struggling, Hynix became an SK affiliate in 2012. Three years later, Chey promised to invest 46 trillion won on additional factories. Following M14 in Icheon and M15 in Cheongju, North Chungcheong, M16 will be the last constructed using that budget.

The chipmaker’s new CEO Lee Seok-hee also attended the event. “While M14 and M15 were a dream-come-true for SK Hynix after a decade of zero factory expansions, M16 marks the start of a new leap,” he said.

Apart from M16, SK Hynix is also pushing for expansions at overseas factory C2 in Wuxi, China. The M15 factory in Cheongju which finished construction in October is currently in the process of having production equipment installed.

Multiple research organizations predict that the semiconductor market’s super cycle is likely to end next year. Some raise concerns that building more factories at a time like this may prove to be a risky decision.

SK Hynix’s continuing drive for facility expansion, however, is rooted in the expectation that even if chip prices fall in the short term, demand will increase in the long term thanks to further tech development in fields like artificial intelligence, cloud and personal devices requiring more memory.

The Ministry of Trade, Industry and Energy also revealed in a Tuesday report that it would build a 120 trillion won semiconductor complex over the next 10 years. Local media outlets reported that SK Hynix is set to play a major role in that government-led project. An SK Hynix spokesman, however, said Wednesday that nothing is decided on the matter.