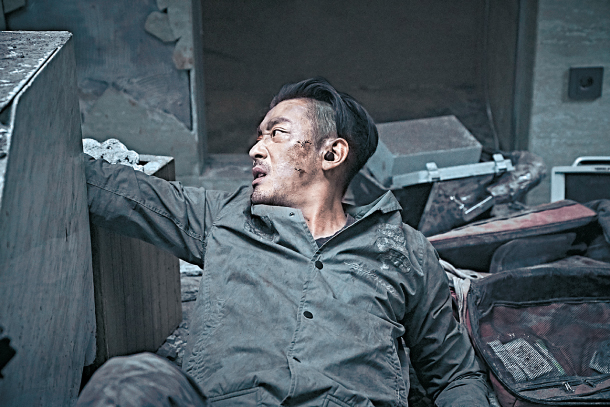 After being worked on for the past five years, the movie will finally get a theatrical release later this month.

Co-starring Lee Sun-kyun, the movie revolves around a mercenary force led by Ahab (Ha) on a covert CIA operation to apprehend a high-profile North Korean official at an underground bunker located 30 meters (98 feet) beneath the surface of the demilitarized zone (DMZ). Lee plays an elite North Korean doctor who happens to enter the bunker.

Shot from a first-person perspective, the movie offers an exciting, yet sometimes dizzying point of view for some viewers.

“From the very start of working on this movie, my top priority was to have audience members feel like they are right next to Ahab instead of watching him from the third-person perspective,” the director said at a press event held on Wednesday. “Looking at the movie now, I think some of the scenes seem too much, which could possibly cause nauseousness for some viewers. But, since delivering the story that way was my goal from the beginning, I put effort into delivering the film in a smarter way.”

Because the movie’s dominant language is English, practicing lines in a foreign language was one of the most difficult challenges for Ha while working on the film.

“I knew how stressful the language issue could be after having a similar experience with previous films like ‘The Handmaiden’ (2016),” he said. “I spent four months focusing on studying English.”

Although the film contains political elements, the heart of the movie is humanity and caring for one another.

“After releasing ‘The Terror, Live,’ I looked back on what I had missed and the mistakes I made in the film. My conclusion was that I should focus more on characters and the stories they have.”

Rated 15 and above, the film is scheduled to arrive in theaters on Dec. 26.