Biegun is spending four days in Seoul for range of talks

Biegun is spending four days in Seoul for range of talks 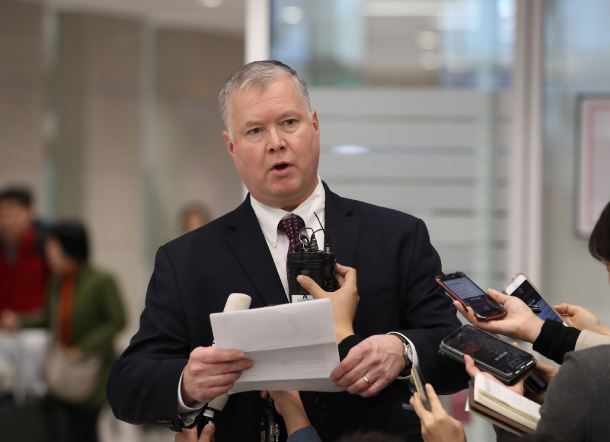 Stephen Biegun, the U.S. special representative for North Korea, speaks to reporters upon his arrival at Incheon International Airport on Wednesday. [YONHAP]

Stephen Biegun, the U.S. special representative for North Korea, kicked off a four-day visit to Seoul Wednesday to meet with his South Korean counterpart a week ahead of a groundbreaking ceremony for an inter-Korean railway project.

The visit, a chance for Washington to convey to Seoul its view of inter-Korean projects, comes as the U.S. State Department underscored that sanctions relief will not come to Pyongyang until it denuclearizes and as a warning that there will be a crackdown on North Korean vessels evading sanctions.

Biegun and Lee Do-hoon, the South’s special representative for Korean Peninsula peace and security affairs, will hold their second face-to-face meeting following the launch of a consultative body aimed at increasing coordination on the North Korean denuclearization issue last month in Washington.

The working group meeting is scheduled for Friday, and Seoul and Washington are expected to discuss the groundbreaking ceremony for the inter-Korean railway and roads project scheduled for Dec. 26 in Kaesong. Seoul will also have to clear with Washington any issues that could constitute sanctions violations ahead of the joint groundbreaking ceremony.

Biegun is also expected to meet with Unification Minister Cho Myoung-gyon during his visit, who will further explain various inter-Korean initiatives. Seoul is pushing for regular video conferences between families separated during the 1950-53 Korean War, but this would require sending to the North equipment such as screens and cables that could violate sanctions.

Biegun, upon arriving at Incheon International Airport Wednesday afternoon, told reporters that Washington will “re-evaluate” its travel ban on U.S. citizens visiting Pyongyang early next year to help facilitate humanitarian aid organizations assisting the North. He said that U.S. Secretary of State Mike Pompeo called to review policy on humanitarian aid to the North and that he would meet with civic and religious organizations to discuss the matter next week when he returns home.

While keeping with “international standards,” Washington believes that “conditions are right for us to reevaluate how these policies are implemented, and we plan to do so early next year,” he said.

The State Department on Tuesday underscored its offer to lift sanctions on Pyongyang as soon as it denuclearizes, amid a deadlock in dialogue. No North Korea-U.S. working-level or high-level talks have taken place in the past two months.

Ahead of the visit, Robert Palladino, the deputy spokesman of the State Department, said in a briefing in Washington, “The world remains united in enforcing and implementing United Nations sanctions until the final, fully verified denuclearization (FFVD) of North Korea.”

U.S. President Donald Trump “has made it clear that sanctions relief will follow denuclearization,” Palladino added. “And the sooner North Korea denuclearizes, the sooner sanctions can be lifted.”

Biegun, a former Ford Motor executive, has not held talks with his North Korean counterpart, Vice Foreign Minister Choe Son-hui, since he took the post as special representative in September.

But Washington, said Palladino, “remains confident that the commitments” made by Trump and North Korean leader Kim Jong-un at their June 12 summit in Singapore “will be fulfilled.”

The working group meeting in Seoul will be “very much focused on strengthening United States-Republic of Korea coordination,” he said, and will be “focused on our joint efforts” to achieve the goal of FFVD of the North and “to flesh that out further.”

He continued, “And that will include inter-Korean cooperation projects as well,” without elaborating.

During the first working group meeting co-chaired by Lee and Biegun on Nov. 20, Washington gave the green light to Seoul to go ahead with a joint survey for its inter-Korean railway project, which was initially expected to take place in late October.

There were concerns that if South Korea provided North Korea with vehicles, machinery and other equipment for track and road connections, it could violate UN Security Council resolutions. Likewise, the groundbreaking ceremony next week in Panmun Station, north of the inter-Korean border, is seen to be largely symbolic. For construction of railways to begin, Seoul would have to seek sanctions waivers from the United States and United Nations.

The South Korean Ministry of Foreign Affairs in a statement Tuesday said that Lee and Biegun “will discuss in detail inter-Korean relations” and the full range of nuclear-related issues concerning North Korea, including the results of the recent contacts between the United States and the North. They will also discuss “diplomatic response strategies on the North Korean nuclear issue to be implemented in early 2019 and other ways to seek tangible progress toward denuclearization and peace,” it added.

For this session, the U.S. team is expected to be led by Alex Wong, the U.S. deputy assistant secretary for North Korea, and South Korea by Lee Dong-yeol, the director general for Korean Peninsula peace regime.

Washington has been concerned that inter-Korean relations may advance more quickly than denuclearization negotiations.

A U.S. State Department official told the Voice of America (VOA) Wednesday that North Korean ships that support and enable sanctions evasion “are finding it increasingly difficult and more expensive” to do so.

This official added that three vessels engaged in sanctions evasion “have been removed from service, and we anticipate several others will be removed soon.” Likewise, the United States is “coordinated with a number of like-minded countries,” such as Japan, Australia, New Zealand, Canada, France and Britain, to counter the North’s illicit activities and also ensure that UN Security Council resolutions “are more effectively implemented.”

The United States and its allies and partners, as a part of such efforts, have “deployed aircraft and surface vessels to detect and disrupt these activities,” said the official. It has also increased monitoring and surveillance to detect illicit North Korean maritime activities prohibited by the United Nations.