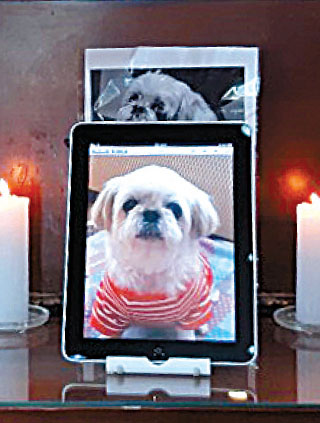 The elderly couple was in tears as they watched their dog, Hani, who was dressed in hemp and lay peacefully in front of them. Hani’s Buddhist funeral at Pet Land, a pet funeral home in Seongbuk District, central Seoul, took over an hour.

The couple said the funeral was the least they could do for their beloved pet.

“There aren’t many people who use the pet cremation service,” said Park Yeong-ok, the owner of Pet Land. “There are a lot of crematorium operators that are deciding to open funeral homes for pets, yet the majority of them who do go in business suffer from financial difficulties.”

Park was firm that the pet funeral home business is not a new one.

Park has been working in the funeral pet business ever since September 1999. He said that “many of the [pet crematoria] only use one of the two machines. There are many business that have shut their doors after attempting [to boost] business by changing their work hours to around the clock.”

Park concluded by saying that, “[pet owners] had to change the way they view funeral pet homes in order for the business to work.”

“Many owners feel a financial burden after they receive funeral consultation, which is why they decide to bury them in the mountains,” said Park.

The funeral costs for a dog that weighs less than five kilograms (11 pounds) starts at 200,000 won ($176). The costs cover the casket the pet is put into while they are cremated as well as the cremation itself. If a pet weighs over five kilograms, an additional 10,000 won is added for every extra kilogram. If the owners opt to put the ashes in a memorial hall or decide to dress their pet for an open casket, the funeral cost can spiral up to one million won. People who have the money do use pet funeral services, but the majority of pet owners decide not to because of the price.