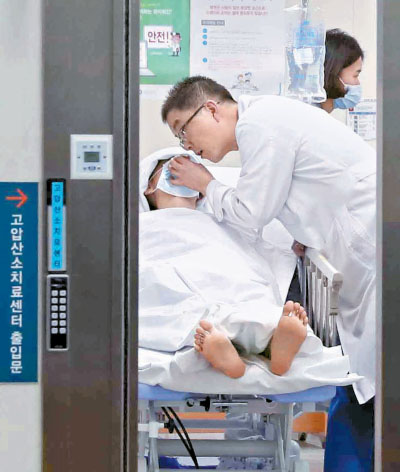 The medical staff at Gangneung Asan Hospital check on a student who just finished his hyperbaric oxygen therapy. The student was found unconscious at a pension in Gangneung, Gangwon, on Tuesday, after inhaling an excessive amount of carbon monoxide. [KIM SANG-SEON]

Three teenagers were dead when the group was found on Tuesday while seven were unconscious.

Kim Han-geun, Gangneung's mayor and supervisor of the response team, credited the recovery to the hyperbaric oxygen therapy that all seven students received. The treatment put the students in high-pressure oxygen chambers that exposed them to air pressure two to five times higher than normal to ensure they are inhaling pure oxygen that dilutes the carbon monoxide in their body.

The first student to regain consciousness is now able to walk on his own, while the second student is now able to drink water. Both are able to have simple conversations with their caretakers. Three students are still unconscious but do react to stimuli, while two still remain unconscious.

Kim added that all of the students are going to be hospitalized for at least a week. The five survivors who are still unconscious will spend at least two hours twice a day in the high-pressure oxygen chamber until they regain consciousness.

“The treatment for the two students who have regained consciousness will include psychotherapy to treat their post-traumatic stress disorders as well as monitoring any future complications that might come from the accident,” said Kang Hui-dong, the head of the emergency center at Gangneung Asan Hospital, during a briefing on Wednesday.

Earlier on Wednesday, the police confirmed that there was a defect in the boiler exhaust pipe at the pension in Gangneung. This likely could have caused the deaths of the three teenagers who died due to carbon monoxide poisoning.

Police announced the preliminary results after conducting a joint investigation at the scene with the National Forensic Service (NFS) and the Korea Gas Safety Corporation.

The faulty exhaust pipe, upon a cursory visual inspection, was dislocated from the boiler system. After turning on the boiler to see how it operated, investigators found a large quantity of carbon monoxide leaking through the faulty pipes.

No gas alarm was installed near the boiler that would have alerted the students about the gas leak.

Experts expect that even if the students were conscious during the leak, they would have been unable to escape from the scene because of muscle paralysis.

The boiler, which was located on the second story of the pension near the veranda, will be transported to the NFS for further examination once the on-site investigation ends, the police added. It was later reported that the problematic boiler system was approved in a safety inspection conducted by the Korea Gas Safety Corporation on Nov. 20.

“The overall investigation will take 15 days, after which the reason for the incident will be revealed,” the police said.

In response to the tragedy, the government has vowed to provide every means of support possible to help the victims and their families.

“We will spare no efforts in assisting the victims’ families and will make sure each ministry and government agency does their job meticulously as soon as we learn the exact cause for the accident,” said Education Minister Yoo Eun-hae on Tuesday.

The Seoul city government announced on Wednesday that they were going to cover all funeral expenses for the three deceased students and provide counseling for the survivors and their families.

An additional counselling class will open at the students’ high school in northern Seoul for faculty members and students traumatized by the deaths.

Korea currently has no law that requires properties be equipped with carbon monoxide detectors.