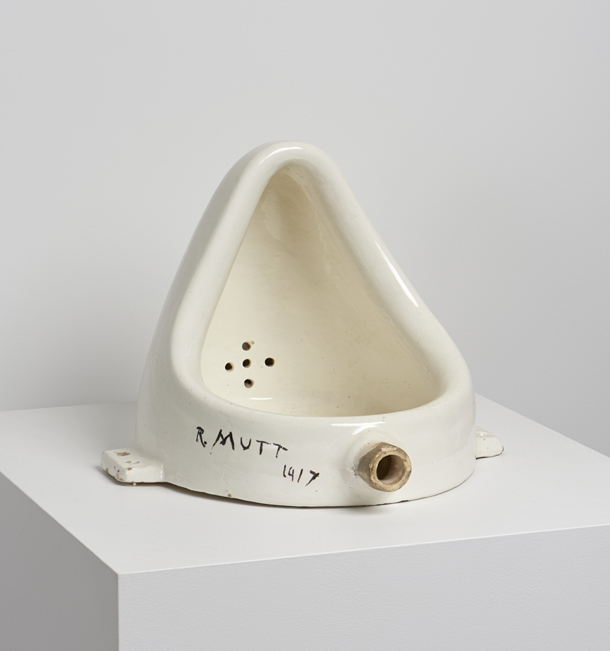 Marcel Duchamp’s 1950 replica of his iconic work “Fountain”(1917) is part of his retrospective in Korea at the National Museum of Modern and Contemporary Art (MMCA) in central Seoul. [ⓒ Association Marcel Duchamp /ADAGP, Paris - SACK, Seoul, 2018]

There is a famous quote about artist Marcel Duchamp (1887-1968) by the Korean-born pioneer of video art Nam June Paik (1932-2006). He said in a 1974 interview that “Marcel Duchamp has done everything except video. He made a large door to enter and a tiny door to exit.”

This doesn’t only show why Paik chose to explore video art, but also summarizes the great influence and the great burden Duchamp has given to the artists who followed him.

Now, Korean art lovers can see what makes Duchamp so inspirational and controversial at his largest-ever retrospective in the Asia-Pacific region, which starts on Saturday at the National Museum of Modern and Contemporary Art (MMCA)’s Seoul branch east of Gyeongbok Palace.

The exhibition has been co-organized by the Korean museum and the Philadelphia Museum of Art, which has the world’s largest collection of Duchamp’s works based on the collection of Walter and Louise Arensberg, who were Duchamp’s primary patrons.

The Korean exhibition features about 150 pieces from the U.S. museum, including the most famous (or notorious) “Fountain” and other Duchamp ‘readymades.’

According to the MMCA, Duchamp originally presented “Fountain” - the highlight of the retrospective - in 1917 to the first exhibition of the Society of Independent Artists in the United States. He was working as a board member and intended to test the organization’s open-mindedness.

He chose a ready-made urinal, signed the pseudonym “R. Mutt” on it and displayed it under the title “Fountain.” After much debate by members of the board, they voted to not display the work in the show. Duchamp stepped down from the board in protest.

Duchamp wrote to the art and Dada journal “The Blind Man” to defend Mutt’s - or rather his - work. “Whether Mr. Mutt with his own hands made the fountain has no importance. He CHOSE it. He took an ordinary article of life, placed it so that its useful significance disappeared under the new title and point of view - created a new thought for that object.”

“Not only the urinal - the object, but his act, the viewers’ reactions and the debate make the work ‘Fountain,’” explained Lee Jihoi, curator of the MMCA, during a press preview on Thursday. “This is a characteristic of contemporary art that appeared decades later.”

Duchamp was one of the first artists to challenge the modern idea that an artwork must be created by the artist’s authentic touch and have the aura of the artist’s other self. Duchamp sought to question what the exact definition of art is. Thus, his work, “Fountain,” is not actually a urinal but a question itself. A concept became art in his work, making it one of the earliest examples of Conceptual Art, which appeared in earnest in the 1960s.

“He not only developed modern art in the first several decades of the 20th century, but also what [was] to come much later,” Timothy Rub, the director of the Philadelphia Museum of Art, said during a press preview.

The “Fountain” on view is actually a 1950 replica of the 1917 work, the earliest full-size replica, signed “R. Mutt,” again by Duchamp himself, because the original was discarded. However, if the essence of “Fountain” is a concept rather than a urinal, why did he made the replica?

Matthew Affron, the Muriel and Philip Berman Curator of Modern Art at the Philadelphia Museum, explained, “In the 1950s and 60s, as Duchamp’s public profile expanded very quickly, there was a great demand for an exhibition of replicas of his earlier works. So it was simply a response to demands.”

“And Duchamp was very happy because they created further twists on all the ideas about the original, the first and the valuable ones in art, which he had already twisted with the readymade,” he added. “He said he was happy to sign many replicas because the more he signed, the more the objects will be devalued.”

The retrospective is arranged chronologically and divided in four sections. The first section “A Painter’s Life” features Duchamp’s paintings from his teens and early 20s, which show his experimentation with various modern art movements including post-Impressionism, Symbolism, Fauvism and Cubism. Viewers may be surprised by his excellent painting techniques and realize that his fondness for found objects was not due to a lack of technical skill. 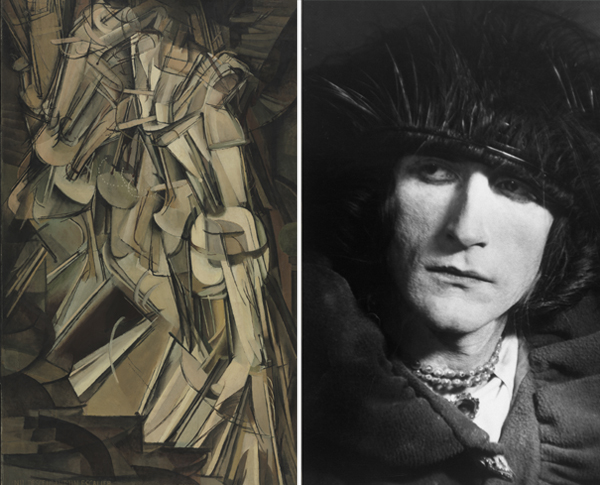 The highlight of the section is “Nude Descending a Staircase (No.2),” which Duchamp presented when he joined the Cubists in Paris. The painting, which depicts the movement of a naked person like the dynamics of a machine, was not welcomed by the Cubists, possibly because it reminded them of Futurists who actively used a number of afterimages to express speed and dynamics. “That painting caused a sensation at the Armory Show in 1913, making Duchamp famous in New York before he ever arrived on American shores,” said MMCA curator Lee.

The second section is titled after Duchamp’s important question, which later changed art history; “Can works be made that are not ‘of art?’”

The section features works including the 1964 replica of “Bicycle Wheel” (1913), the first of his ‘readymades,’ the 1961 replica of “Bottlerack” (1914), as well as “Fountain.” There is also a video piece about the monumental construction, “The Bride Stripped Bare by Her Bachelors, Even (The Large Glass),” which could not leave the Philadelphia Museum, on view. 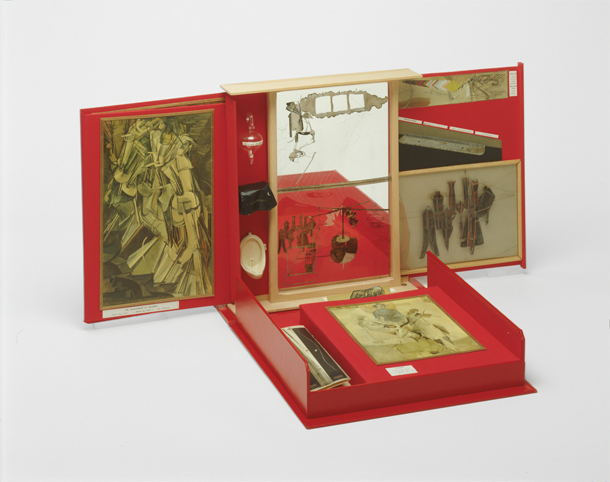 “From or by Marcel Duchamp or Rrose Selavy (Box in a Valise)” is a leather valise containing miniature replicas and color reproductions of works by Duchamp. [ⓒ Association Marcel Duchamp /ADAGP, Paris - SACK, Seoul, 2018]

The third section is particularly mysterious - as it features the works of Duchamp from the 1920s and ‘30s, when he shifted his vocation from art to chess - in which he had already expressed interest through his paintings. At the time, he continued working on his art, launching new projects while using the invented identity of his female alter ego, Rrose Selavy.

Among the exhibits in this section are American artist Man Ray’s photographs of Duchamp dressed as a woman - Rrose Selavy - which gives the strange impression of the “third sex.” “I don’t think that Duchamp was operating in the notion of the third sex. I’ve seen no evidence for that,” Affron said. “But he was very open-minded to interpretations.”

In the same section are two editions of “Box in a Valise,” whose original title is “From or by Marcel Duchamp or Rrose Selavy,” which alludes to the situation of Duchamp having to leave Paris again for New York, this time to escape World War II, and his concerns about the preservation of his works.

“Etant donnes” is a tableau, which depicts a nude woman lying in a bush with her face hidden, legs spread, holding a gas lamp in the air in one hand against a landscape backdrop. It is made of various mediums and visible only through a pair of holes in a wooden door. It offers a new experience to museum visitors “by disturbing their usual behaviors in museums,” Affron said.

Duchamp secretly worked on it from 1946 to 1966 as “a final artistic statement” according to the MMCA, while it was believed he had essentially retired as an artist. According to the artist’s wishes, the work was only put on view in 1969, after his death.

“Marcel Duchamp continues to fascinate artists and scholars in our own time,” Rub, the director of the Philadelphia Museum of Art, said in the press preview. “We cannot understand much of contemporary art without understanding Duchamp himself and his art.”