All grown up, Winner is ready for more: The YG boy band is hoping to be even busier in 2019

All grown up, Winner is ready for more: The YG boy band is hoping to be even busier in 2019 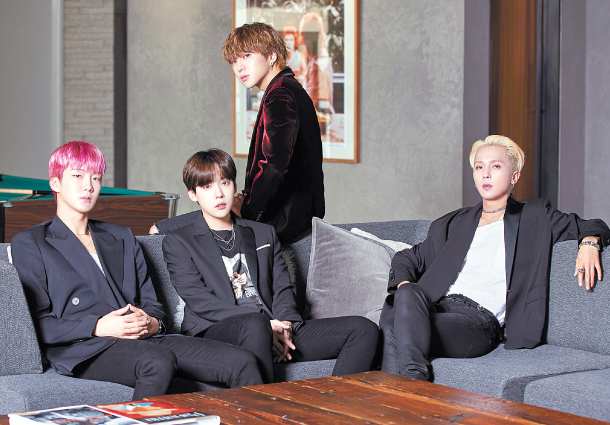 With just a few weeks remaining in 2018, boy band Winner has dropped a single that their fans have been waiting for all year.

“We promised our fans that we would release music two times this year, and we are happy to keep that promise,” said the group’s leader Kang Seung-yoon during an interview on Wednesday in Hongdae, western Seoul.

“Millions” is a tropical dance pop track about the millions of reasons everyone deserves to be loved. The members themselves wrote and produced the song. Although “tropical” may not sound like it suits the winter, the song is a warm “Christmas gift to the fans,” according to the group.

“We worked on the song over the summer, but we wanted it to be perfect, so we kept editing it until now,” said Kang, explaining the reason behind the tropical vibe of the song. “At first, we wanted to deliver the simple message that ‘there are million reasons to like you.’ But I was surprised when Mino [took it to a another level] and [asked in return,] ‘Why do you like me so much though?’”

Most importantly, the group members were thinking about their fans while writing the song.

“I’ve been looking through our social media accounts, and I’ve noticed that a lot of our fans like specific parts of our bodies - like our hands, knees and even elbows,” said Kang. “Then I thought, people like us for things that we have never thought even mattered - they can like us for so many different reasons.”

The group has high hopes for the song.

“We received a lot of positive feedback from [our CEO,] Yang Hyun-suk,” Kang added. “Usually, he simply comments, ‘Seems good’ [after listening to our new songs] or compliments us indirectly. But this time, he directly told us through a group chat, ‘I’ve got a feeling,’ ‘This will be successful’ and ‘I’m 200 percent sure.’ In some ways, I’m worried that we might not fulfill his hopes. But it feels like we have gotten closer to him.”

But Song Min-ho, otherwise known as Mino, admits that he is still not totally comfortable with Yang. Song referred to the YG Entertainment CEO as “Yang father” after he recently won the No. 1 spot on SBS’ music program “Inkigayo” for his single “Fiance.” Yang then posted a comment on his Instagram jokingly telling Song that he can just call him “Yang bro.”

“I still feel [a bit] uncomfortable with him,” Song admitted. “He’s my mother’s age. Maybe I can call him [brother] using a very small voice.”

It has already been five years since the group debuted with their first album “2014 S/S.” The group was originally composed of the five winners of the 2013 Mnet audition program “WIN: Who is Next.” Member Nam Tae-hyun left the group in 2016, but the other four have continued as Winner.

They were recently on the other side of the judges’ table during a special appearance on the currently airing V Live audition program “YG Treasure Box.” The show features male trainees from YG Entertainment competing to be a part of the agency’s next boy band.

“It’s sad in a way, watching them [compete] on the show [because] I could relate to them well,” said Kang. “I just hope they can all do well.”

Over the past five years, the members have achieved far more than what they expected in the beginning.

“I feel like I have already achieved more than what I could have dreamed of five years ago,” said Song. “But every year, I have higher hopes and bigger dreams.”

Lee Seung-hoon, meanwhile, has learned to enjoy the present.

“Before, I had a lot of worries, which, now that I think of them, were nothing major. I’ve developed [by overcoming those hardships,] and now I realize that I should just focus on the present and enjoy myself.”

Kim Jin-woo has also grown more comfortable over the years.

“Five years ago, I think I was hiding who I really was ? I felt I was someone fake. Now, I feel more comfortable [about expressing myself].”

Although the Christmas holidays are approaching, the members are going to be busy with rehearsals for upcoming performances. Their schedule for this month is fully packed, but they still plan to celebrate Kang and Lee’s birthdays together in January.

Soon after that, they are holding a concert in Seoul and will kick off their North American tour.

“Our agency asked us whether we want to do this tour because our album might get released later than scheduled,” said Lee. “But if not now, when? [The tour] begins very soon and we are looking forward to it. We are practicing our English a lot and we are very excited [for this tour.]”