The Kospi declined 0.9 percent to 2,060.12 compared to the previous trading day, while the tech and bio-heavy Kosdaq dropped 0.59 percent. 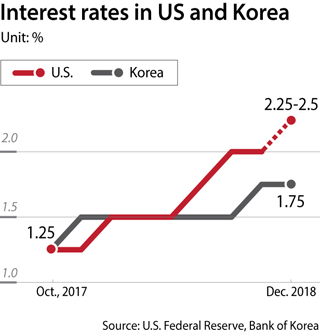 These indexes followed the poor performance in U.S. shares. The Dow Jones Industrial Average closed down 352 points, or 1.5 percent, on Wednesday. The S&P 500 dropped 1.5 percent, while the Nasdaq declined 2.2 percent.

The Federal Open Market Committee (FOMC) announced overnight that it would increase its benchmark interest rate by 25 basis points to a target range of 2.25 percent to 2.5 percent.

The decision was widely expected. But comments from the Fed suggested that the number of hikes in 2019 would be reduced from three to two.

With some uncertainty in the global economic outlook, investors anticipated more dovishness in the statement and comments from Fed Chairman Jerome Powell. The chairman suggested the Fed will continue to tighten policy through asset holding reductions and that future rate decisions will be data-dependent, a stance that fell short of investor expectations.

“Overall, the December FOMC meeting was reassuring in terms of the U.S. economy and the broad direction of rate hikes,” said Kim Yu-kyum, an analyst at Cape Investment & Securities. “But the markets were disappointed as the Fed maintained its plan to keep raising the rates, and it expressed no intention to bring up any accommodative monetary policy.”

The Fed’s latest increase widened the rate gap between the U.S. benchmark rate and Korea’s to 0.75 percentage points. The Bank of Korea (BOK) lifted its key rate from 1.5 percent to 1.75 percent last month, the first increase in a year. BOK Gov. Lee Ju-yeol said that the Fed’s rate rise was anticipated.

“The result is not something unexpected,” Lee told reporters on Thursday, “But we need to keep on monitoring the market movements given the U.S. rate’s impact on the Korean economy.”

The governor struck a positive note on the Fed’s comments about being more cautious with 2019 hikes.

“If the U.S. delays rate hikes, their negative impact on the world economy could be mitigated and other countries could become more flexible in managing their monetary policies.”