Galaxy A9 has a camera ready for every occasion

Galaxy A9 has a camera ready for every occasion 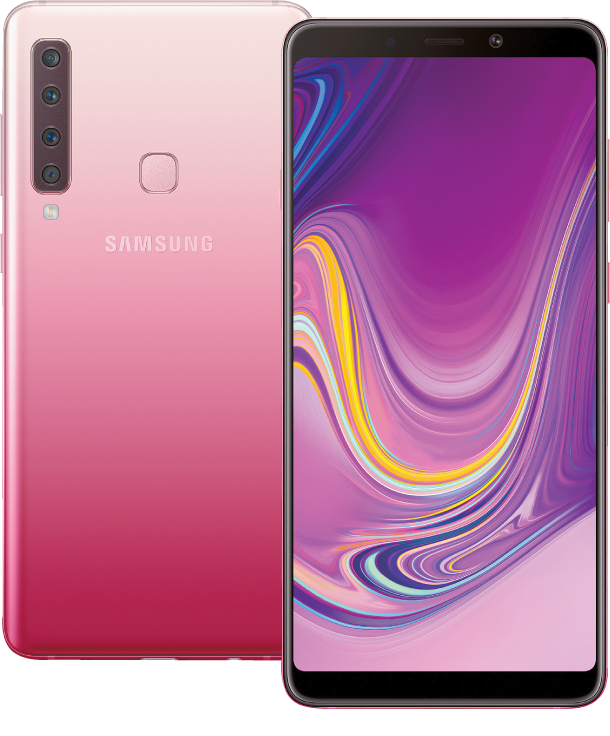 Samsung Electronics started domestic sales of its mid-range Galaxy A9 smartphone today - the company’s first model to be equipped with four rear cameras.

The Galaxy A9 was first revealed in October in Kuala Lumpur, Malaysia, and has already started sales in China, India and several countries across Southeast Asia and Europe. In Korea, the device will cost 599,500 won ($530), nearly half the price of Samsung’s most recent premium phone release, the Galaxy Note9.

Overseas, the A9 comes with either six or eight gigabytes of RAM, but in Korea only the six-gigabyte option will be available. The device comes with 128 gigabytes of data storage, which is expandable to 512 gigabytes with a microSD card. There are three color options - black, blue and baby pink.

Its most notable feature is its five cameras - one on the front and four on the back - which are the reason it is known as a “quad camera” smartphone. The front camera can take photos up to 24 megapixels and comes with a function to blur out the background when taking a selfie. 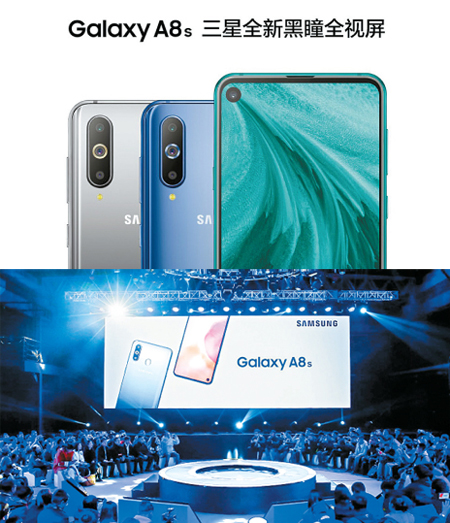 Samsung Electronics’ mid-range Galaxy A9. The device has one camera on the front screen and four on the back. [SAMSUNG ELECTRONICS]

The main rear camera can also take photos up to 24 megapixels with a very low aperture of F1.7, which means the camera will perform better in darker environments. The other three cameras have slightly different functions.

A 10-megapixel telephoto camera offers a 2X optical zoom lens, while an eight-megapixel ultra-wide camera can capture a up to 120 degrees. The final camera, a five-megapixel depth camera, is used to blur out the background of an image.

Despite being a budget model, the A9 is equipped with smart camera functions normally found in top-of-the-range models. The “intelligent camera” function can optimize an image’s brightness and contrast after automatically recognizing the object or scene. It also alerts the user if the image is shaky or somebody blinks.

Samsung said in a statement that it anticipates the five cameras to make the A9 “an optimal model for generations of ‘visual communication’ who mainly communicate with photos and videos.”

The inclusion of quad cameras on a budget model reflects Samsung’s shifting smartphone strategy that Koh Dong-jin, CEO and head of the IT giant’s mobile business, stressed earlier this year - to apply state-of-the-art functions to mid-priced models. 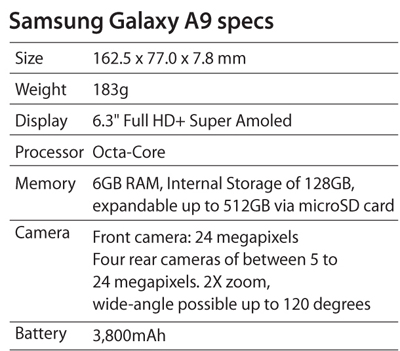 Until a few years ago, Samsung was one of the top manufacturers of smartphones along with Apple. Recently, its global performance has dwindled as demand for up-scale premium phones have retreated. Another big threat is the advance of Chinese manufacturers like Huawei that upped their game in technology and released a wide range of mid-priced smartphones. Budget phones are especially important in that they cater to the massive Chinese and Indian markets, explaining why global smartphone makers are getting so competitive in the price sector.

The A9 isn’t the first affordable Samsung phone with high-end features. On Dec. 10, it unveiled the Galaxy A8s, a smartphone in the mid-price range and the first to have a so-called hole display. Its screen covers the phone’s entire front, except for a small hole in the display’s corner for the front camera. The unpacking event, which was Samsung’s first in China, also sent a signal that Samsung is determined to win back market share in the country.

“You might think this is an ordinary unpacking event, but it’s more of an occasion to send an ambitious message to you all - Samsung Electronics will embark on a full-fledged competition with Chinese manufacturers,” said Kwon Gye-hyun, the company’s vice president for its China business, during the event.