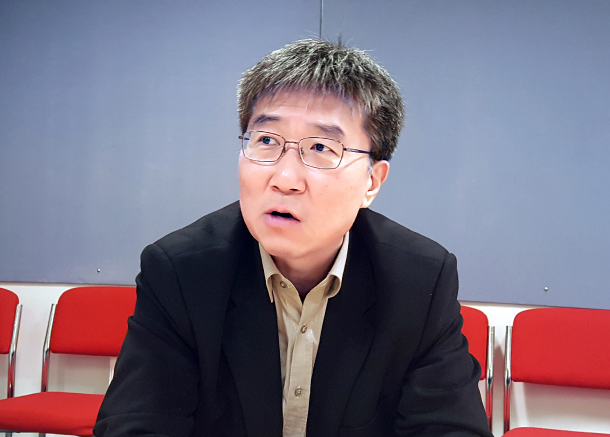 Chang Ha-joon, an economics professor at the University of Cambridge, diagnosed Korea’s current economy as in “crisis.”

In a recent interview with the JoongAng Ilbo, Chang said the current government’s economic policies, such as the minimum wage hike, are just a temporary cure. Adapting policies from overseas that are not suitable for Korea’s distinctive situation is not making anything better, he says.

“The Korean economy’s problem neither derives from chaebol greediness nor the government’s excessive regulations,” he said.

“It is because Korea’s main industries have melted due to a lack of investment and new technology that has accumulated for the past 20 years.”

Chang said it is vital to come up with a Korea-specific model after the government and chaebol grow out of their conflicting relationship.

“Acknowledging how serious the problem is, is the first step to resolving it.”

Q. Korea’s economy looks grim. What do you think about its prospects?

A. There is nothing new about that prospect and it also is not because of the minimum wage hike. For the past 20 years, Korea’s economy has lost to China due to lack of investment.

It’s not about a specific administration, but has been going on throughout the administrations of Kim Dae-jung, Lee Myung-bak, Roh Moo-hyun, Park Geun-hye and Moon Jae-in. It seems like there has been a lot of investment after the financial crisis, but capital expenditures have actually halved since then. The auto, shipbuilding and semiconductor industries have led growth in Korea between 1970 and 1980. After the ’90s, it was cellphones that towed growth, but it is pretty much the only item we’ve found so far. Semiconductors are the only industry where we can say that Korea is better than China, but even this is not guaranteed because China is rapidly catching up.

The Moon Jae-in administration is pushing for income-led growth. What do you think about this strategy?

It will bring about a positive effect in the short-term because those with low income will be able to spend more. But it is nothing more than a quick nutrient injection. It doesn’t fundamentally fix the illness. Companies are only blaming regulations, but it is not the regulations that let China catch up in semiconductors and smartphones. The left-wing government only talks about the minimum wage increase and right-wing conglomerates only talk about regulations. They are both missing the point.

We have to acknowledge that we are in a crisis in order to find the right solution. We have to develop new technology and make new investments acknowledging that China is steadfastly chasing after us instead of looking into the past to find reasons why we have stagnated for such a long time. We have to also encourage young people to study engineering instead of opting for safe options like studying medical science, law or trying to become public servants. Then it would lead to a conclusion that we have to strengthen the social safety net and welfare.

Why did you mention Sweden as the country that Korea should refer to?

Countries that have succeeded in economics were extremely practical. Countries like Sweden and Finland are examples where growth and distribution were righteously mixed. The Wallenberg family from Sweden has been inheriting their business for six generations and are responsible for 30 percent of the country’s GDP. It is not even comparable to Samsung or Hyundai in Korea. The conflict between the left and right-wing stance has to be resolved in Korea.

There are opinions that welfare wouldn’t resolve everything.

Even during the neoliberalism era in the ’80s, the number of advanced welfare nations continued to grow. It is because of the aging society. Among OECD countries, Korea comes in second to last when it comes to spending on welfare. Mexico comes in last. While the average ratio of social welfare expenditure to GDP among OECD countries is 21.5 percent, the figure for Korea barely exceeds 10 percent.

Employees in Sweden don’t stage strikes if they are laid off because they are guaranteed 65 to 75 percent of their normal pay while the country helps them find new jobs. They are provided with two years of education for their future jobs. Such a safety net doesn’t exist in Korea. If employees here are laid off, their income drops from 100 to 10, which is why they protest. Sweden was one of the countries that rolled out one of the hardest strikes during the 1920s. A socialist party came to power in 1932 and started to implement welfare policies. The labor unions agreed to minimize strikes, and it took 20 years for the new system to settle in. Korea should look 30 years ahead and gradually build a welfare nation.

Policymakers for the economy have been changed recently. Who do you think should lead such a vision?

In a power structure like Korea, the president has to be at the core. Consumers are not going to buy Galaxy smartphones just because they are cheaper than other products. Likewise, companies shouldn’t try to save on labor costs by paying less. The central government has to make massive investments at first to allow the commercialization of new technology and innovation at conglomerates.

Would it be possible to ban foreign investment in order to protect Korean conglomerates?

The political circle is telling Samsung and Hyundai to restructure their corporate governance, but the conglomerates are stuck in a vicious cycle due to foreign investment. They increase dividends and spend money on stock buybacks because, otherwise, foreign investors would attack the company with M&As.

If these companies are engulfed by foreign capital, they would collapse and there wouldn’t be capacity left in the country to invest in new industries and technology. We could implement a dual-class stock system that gives different voting rights to shareholders depending on how long they have to hold on to the stocks. That would prevent short-term investments by foreign capital. Google and Facebook use such a system.