Third teen at pension in Gangneung wakes up

Third teen at pension in Gangneung wakes up 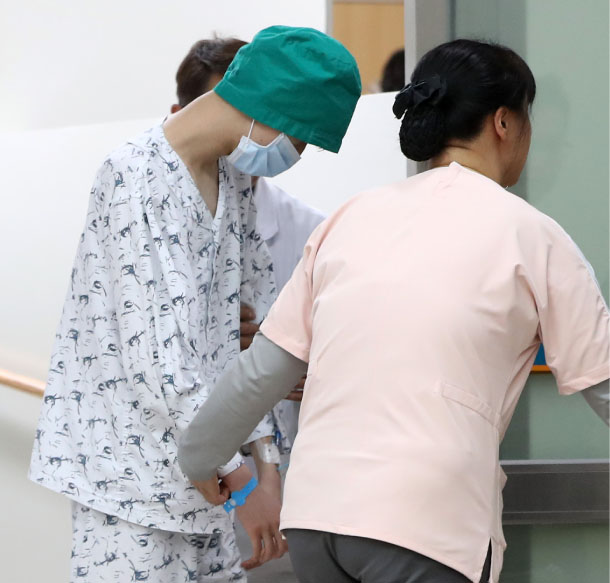 One of the victims of carbon monoxide poisoning in a pension in Gangneung, Gangwon, walks after receiving high-pressure oxygen chamber therapy at Gangneung Asan Hospital on Thursday. Doctors expect that he could be discharged from the hospital tomorrow. [YONHAP]

Three teenagers were dead when the group was found on Tuesday while seven were unconscious.

According to a hospital debriefing on Thursday directed by Kang Hui-dong, head of the emergency center at Gangneung Asan Hospital, all three students are able to converse with caretakers and consume liquids on their own.

The first student who regained consciousness is now able to walk on his own and, if no complications develop during the next 24 hours, could be discharged from the hospital tomorrow.

“The fact that the students were found in different locations all throughout the pension implies that they all inhaled different amounts of carbon monoxide,” said Kang.

“This is the reason why their recovery speed is all different. The student who is ready to go home tomorrow was the student who had the lowest carbon monoxide level in his body when he first came to us.”

“We did not tell the three students that their friends have died,” said Kim Han-geun, Gangneung’s mayor and supervisor of the response team on Thursday. “The medical staff made sure to not reveal this bit of information in fear that their recovery will be stunted from this shocking information.”

The four other students are still undergoing regular high pressure oxygen chamber therapy, but medical staff are optimistic about their recovery.

On Thursday, police investigators announced that they were going to focus on figuring out why the boiler exhaust pipe was dislocated from the boiler system.

This likely caused the carbon monoxide poisoning. Police officers suspect that it has to do with the fact that the boiler was installed by a non-qualified engineer.

A qualified boiler installation engineer must have a government-issued gas license, as well as a hot water system ondol license, and undergo safety education before taking on installation jobs.

However, the police investigation revealed that the original building owner for the pension left the boiler installation to a non-qualified engineer surnamed Choi to save money.

In response, experts are calling for more regulations to stop boiler-related accidents.

The government has announced that they will look into plans that aim to check all the boilers in pensions nationwide.

Currently, Korea has no laws that require rental properties like pensions, hotels, motels and condos to be equipped with carbon monoxide detectors.

A group memorial altar was set up for the three deceased students at Daesung High School, northern Seoul, which they attended.

Due to the wishes of the families of the deceased, the group memorial altar will only be open to Daesung High School students, faculty members and the extended families of the victim’s loved ones.