Son Heung-min will have a busy New Year

Son Heung-min will have a busy New Year 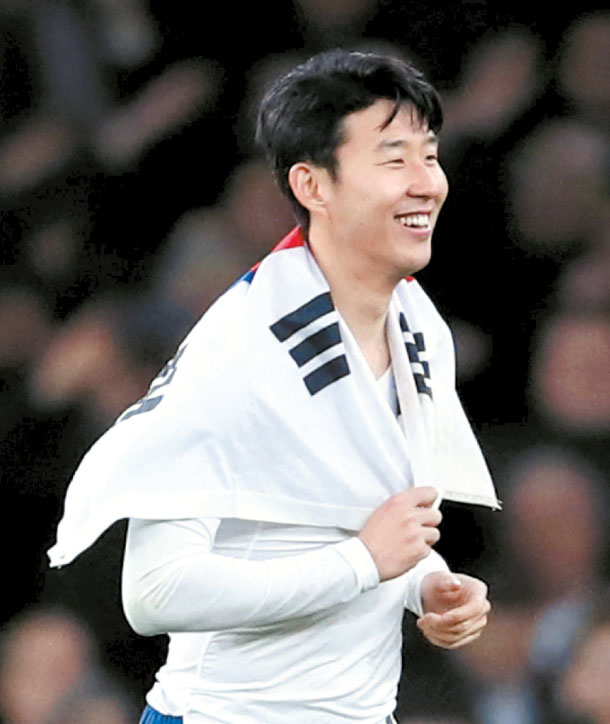 Son Heung-min of Tottenham Hotspur celebrates after the Carabao Cup quarterfinals match against Arsenal at Emirates Stadium in London on Wednesday. [REUTERS/YONHAP]

Son Heung-min of Tottenham Hotspur will have another busy year balancing the Korean national football team’s schedule as well as his Premier League schedule.

When national team head coach Paulo Bento announced his final roster for the 2019 Asian Football Confederation (AFC) Asian Cup on Thursday, Son easily qualified, allowing him to play in the tournament in January.

Although players in foreign leagues are supposed to join the national team by Dec. 26, Son was given an exception to join the team later, as Hotspur and the Korea Football Association (KFA) agreed to release Son after their Premier League match against Manchester United on Jan. 13. But this isn’t all good news for Spurs. By releasing Son, Spurs will have to play the second leg of the Carabao Cup semifinals against Chelsea without him. Not only that, Son will miss Hotspur’s match against Fulham, Watford and Newcastle United if Korea advances to the final at the AFC Asian Cup.

Son’s absence from the Premier League club is once again making headlines internationally. The Daily Mail, The Sun and ESPN have all reported on Son’s absence in three of the team’s matches. Daily Mail pointed out the possibility of Son missing an additional match if Korea were to advance to the final.

“If South Korea reach the final, there is also a chance Son will be unavailable for the game against Newcastle United on February 2,” said the Daily Mail. In August, Son’s absence from Spurs to compete at the Asian Games made headlines around the world as observers focused heavily on his military exemption. As winning a gold medal at the Asian Games meant Son will be exempt from mandatory military service, Korea’s performance received a large amount of attention.

However, this time, Son is receiving the spotlight for his absence with Hotspur. Since Son returned to Spurs after Korea’s October friendlies, Son has gone on a goal streak. On Dec. 5, with his fourth goal of the season, Son became the second Korean football player to score his 100th European league goal.

Then, by scoring against Arsenal during a quarterfinal match in the Carabao Cup on Wednesday, Son recorded his sixth goal of the season.

With his impressive performance over the month, Son was ranked 78th among the top 100 best male football players in the world by The Guardian on Dec. 18. Son became the first Korean football player ever to make it onto the list and the highest-ranked Asian player. Prior to Son, Japanese football players Shinji Kagawa and Keisuke Honda were listed on the list. Kagawa was ranked 94th in 2012 and Honda was ranked 68th in 2013. While Son may miss four matches with Hotspur at most, he will also miss some games with the Korean national football team at the Asian Cup. Son will miss Korea’s first two group matches against the Philippines and Kyrgyzstan.

However, Son will compete in Korea’s last group match against China on Jan. 16.

Aside from Son, the other foreign league players will join the national team at the Asian Cup in the United Arab Emirates on Dec. 26. Korea hasn’t won the AFC Asian Cup title since 1960. The Taeguk Warriors are assigned to Group C along with China, Kyrgyzstan and the Philippines. Korea will start the tournament with a match against the Philippines at Al Maktoum Stadium in Dubai on Jan. 7.

“I can understand that we can have positive expectations for the Asian Cup because we performed well in the last six matches,” Bento said at a press conference on Thursday. “I’m confident that we’ll play well, but I also know we’re not the only team chasing the title. Other teams will be ready, too. I don’t think we’re the favorites.”

At the AFC Cup, Korea enters the tournament as the fourth-highest ranked team at 53rd in the world. Iran is the highest-ranked team at 29th, followed by Japan at 41st and Australia at 50th.

“We’re analyzing our opponents, and can talk more about it when the tournament is near,” Bento said. “Our main goal is to execute our style of play and do what we intend to do on the pitch.”

The majority of the players that attended the training session in Ulsan will be departing for the UAE tonight. Before 2019, Korea will play a one last friendly match against Saudi Arabia on Dec. 31.