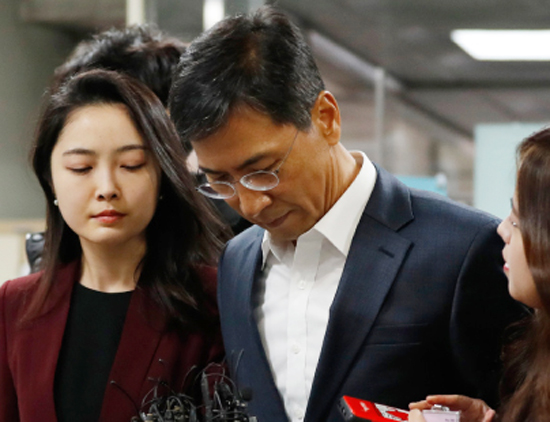 Former South Chungcheong Gov. An Hee-jung appears at the Seoul High Court for his appeal trial on Friday. [NEWS1]

Disgraced former South Chungcheong Gov. An Hee-jung maintained his silence in court on Friday as he faced his first appeals hearing over the sexual abuse charges he was cleared of in an August lower court decision.

The grim-faced former politician only spoke when the leading judge of the Seoul High Court asked his name and address as part of the standard pre-hearing procedure.

“I have no occupation,” An told the court. He then gave the bench his current address, which is different from his home address, saying it’s a friend’s place where he has been staying.

The 54-year-old, once considered a potential liberal presidential candidate, was indicted in April this year for forcing his former secretary to have sex with him and groping her both multiple times between the middle of last year and early this year.

The case became known after Kim Ji-eun, the secretary, made the revelation in a cable TV news interview in February. It led to a torrent of other similar allegations by women about sexual violence by influential men in South Korea.

Despite the public uproar and strong calls from women’s groups for An to be punished, the Seoul Central District Court found the former governor not guilty in the ruling on Aug. 14. The prosecution immediately filed for an appeal.

The court ruled that there was not sufficient evidence to prove An used his position to have sexual relations with Kim. It also didn’t accept the plaintiff’s argument that he had physically subdued her to the point that she was unable to resist.

An stepped down as governor in March, days after Kim’s interview.

Following the opening statements from the prosecution and defendant’s lawyer, the court turned Friday’s hearing into a closed-door session. The court is expected to bring Kim to the stand. The court plans to hold four hearings before delivering its verdict on Feb. 1.