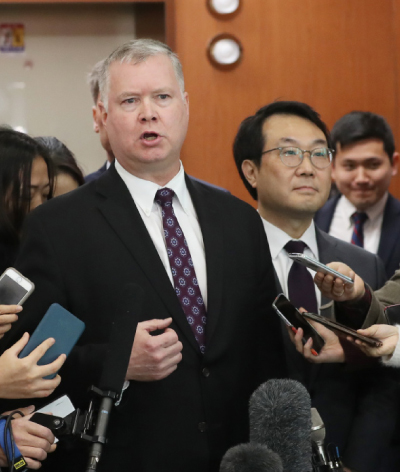 The United States on Friday agreed to make an exception to the ban on industrial material transfers to North Korea, allowing the two Koreas to hold a groundbreaking ceremony for a project to connect their railways next week.

South Korea and the United States held a working group meeting at Seoul’s Foreign Ministry on Friday and discussed North Korea issues, including the two Koreas’ plan to hold the railway project groundbreaking ceremony next Wednesday. The project was a key agreement between President Moon Jae-in and North Korean leader Kim Jong-un at their September summit in Pyongyang. It faced a stumbling block because UN and U.S. sanctions against the North ban the transfer of construction materials to the reclusive regime.

“The groundbreaking ceremony will proceed as planned, following the discussion of the working group meeting,” Lee told the reporters after the meeting, indicating that the United States agreed to the material transfer.

The groundbreaking ceremony is scheduled to take place in Kaesong next Wednesday. In September, Moon and Kim agreed to break ground on the project before the end of this year. Other agreements, including Kim’s visit to Seoul and declaring an end of the Korean War, however, have not proceeded as planned.

The two sides agreed to allow humanitarian projects in the North to go ahead as planned. South Korea will offer Tamiflu, an antiviral medication, to the North, and the two Koreas will continue with their joint project to recover remains of the Korean War, Lee said.

Expectations were high that the United States will make the groundbreaking ceremony an exception to sanctions, as Biegun offered a series of olive branches since he arrived in South Korea on Wednesday. He promised to ease bans on American citizens’ travel to the North for humanitarian projects. This is largely seen as a move to urge dialogue with Pyongyang.

The American diplomat continued to send a reconciliatory message to the North.

“We are eager to move to the next stage of discussions with our North Korean partners,” Biegun said Friday after the meeting at the Foreign Ministry. “We expect in the course of those discussions we would be able to talk about some of the details around President [Donald] Trump’s upcoming summit with Chairman Kim.”

However, Biegun said there are no dates or locations to announce at this point.

His message was in line with U.S. Secretary of State Mike Pompeo’s remark in a radio interview earlier in the day. He said the United States is “hopeful” that Trump and Kim will meet early next year for a second summit.

Biegun still made clear that Washington has no intention of easing sanctions on the North, dismissing speculation that the decision to allow humanitarian assistance was a prelude to easing sanctions.

“The U.S. has no intention of easing our unilateral or UN sanctions,” he said. “However, within the context of the engagement we had with the [North], we are prepared to explore a number of other things that could build trust between the U.S. and North Korea.”

At the working group meeting, the two sides discussed a reunion via video chat between the separated families in the North and South. Although Moon and Kim agreed to the project, it also involves sensitive goods barred by sanctions, such as electronic devices and fiber optic cables. Lee said the two sides will continue discussions on remaining issues.

Later in the afternoon, Biegun visited the Blue House and met with Chung Eui-yong, the national security chief.