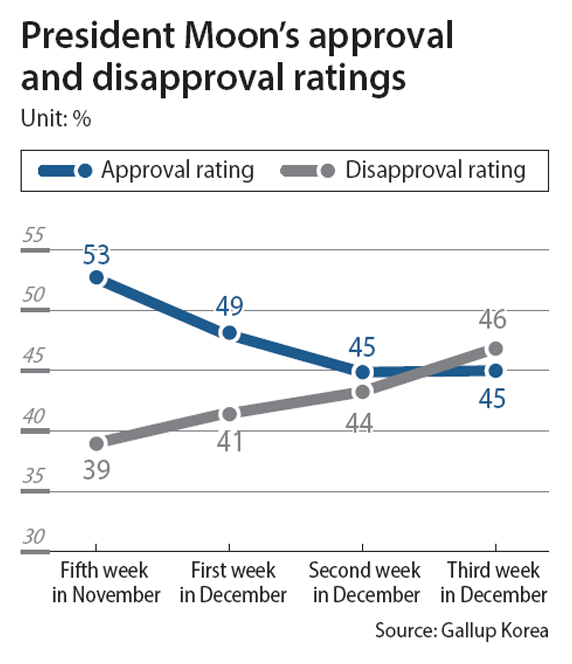 President Moon Jae-in’s disapproval rating exceeded his approval rating for the first time since he took office in May 2017 in a poll released on Friday.

His administration is struggling with slow progress in negotiations with North Korea and a sluggish economy.

Gallup surveyed 1,002 adults from around the country from Tuesday through Thursday. The poll had a margin of error of plus or minus 3.1 percentage points.

Those in their 50s and older gave more negative evaluations of Moon’s performance, while those in their 20s, 30s and 40s were more positive.

“Most of the reasons behind the negative evaluations were about the economy,” said Jung Ji-yeon, a director of Gallup Korea. “The minimum wage issue and [52-hour] workweek issue will resurface next year, so he must manage them well to stop his approval rating from going down further.”

Bae Jong-chan, research director at another pollster Research and Research, said it is clear that more people are turning against Moon.

“When there are more people disapproving of Moon, he will see more obstacles in running the country,” said Bae. “It will then bring about social conflict, and when the situation escalates, it can be a challenge to inter-Korean relations.”

Starting July, however, his rating plummeted over economic issues such as the controversial hike to the minimum wage, rising housing prices and a job crisis. In September, his approval rating in the Gallup Korea poll nosedived to below 50 percent.

In the results of a different poll announced by Realmeter on Thursday, the gap between Moon’s approval and disapproval ratings was almost imperceptible.

Moon is now facing the death cross 20 months into his term. His impeached predecessor, Park Geun-hye, faced the similar situation in June 2014, 17 months into her presidential term.

President Lee Myung-bak faced the death cross during his first year in office amid public rage over his decision to reopen the Korean market to U.S. beef imports. His approval rating, however, rebounded in the second year to surpass the disapproval rating. In his fourth year in office, he faced another death cross, and there was no reversal this time.

The Blue House’s control over the ruling party is expected to be weakened as Moon’s approval rating is falling faster. During the June local election, Democratic Party candidates promoted their close ties to Moon, but such campaigns may disappear in the next general election, scheduled for 2020.

“The Blue House may be able pump up its approval rating if it manages to bring about Kim Jong-un’s visit to Seoul,” said Kim Hyung-joon, a professor of political science at Myongji University. “But that won’t be enough to keep his approval rating high. The key is the economy.

“Moon must show how he will overcome the economic crisis,” Kim said. “The public will only come back to him when there are tangible economic accomplishments.”