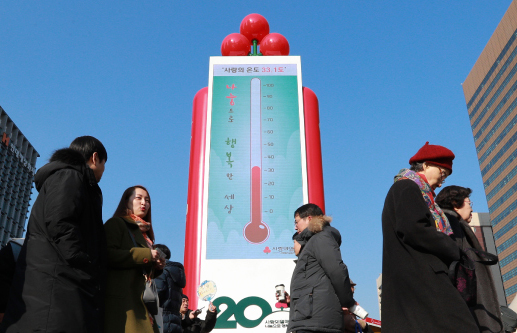 The thermometer-shaped donation index indicates 33.1 degrees as it towers over the bustling Gwanghwamun Square in central Seoul on Thursday. The temperature goes up one degree every time one percent of the total donation goal is reached. [LIM HYUN-DONG]

The thermometer-shaped donation index towers over the bustling crowds in Gwanghwamun Square, central Seoul. The giant thermometer is set up every year by the Community Chest of Korea - a nonprofit, government-sanctioned charity.

As of Dec. 19, the thermometers reads 33.1 degrees, eight degrees lower than three years ago around this time of year. As donations are made, the index rises. This year, the Community Chest of Korea aims to collect 410.5 billion won ($365 million) in donations. Among the crowds walking around Gwanghwamun Square, not many were looking at the thermometer.

“I have to worry about getting a job and paying for my university tuition, which is why I don’t think I’ll be making any donations [this year],” said Jeong Sung-wook, a college student. “Plus, I’m worried that the money I donate will not be put to any good use.”

This holiday season, it seems irrational to expect waves of warm donations. The Community Chest of Korea announced that they had raised about 136 billion won as of Dec. 18. This is more than the amount that was raised a year ago (123.6 billion won) by this time. The increase, however, is because donations from companies and organizations located in Seoul just came in this week. The donations from organizations outside of Seoul are currently just 82 percent of what they were last year.

The number of big-time donators is decreasing as well. The Community Chest of Korea runs the Honor Society, a social club for members who donated over 10 million won. In 2016, the Honor Society welcomed 422 additional members, but last year, that number dropped to 338. This year, as of Dec. 17, only 209 new members were welcomed into the gathering.

Not knowing exactly how the donations are being used is also credited as a reason why fewer people are willing to give this year. According to a research conducted by the Korea Institute for Health and Social Affairs, out of 2,038 respondents, 964 replied that they did not donate because they could not trust charities with their money.

“I was shocked when I heard that Lee Young-hak [a murderer better known as Molar Daddy] used all the charity money for himself,” said Kim So-yeon, a nurse. “That’s when I decided that, instead of not knowing if my donations were being put to good use, I would rather not donate at all.”

Experts are pointing out that charities should be more transparent with the use of the donations they receive.

“Even though Lee Young-hak collected the donations himself, his misuse led to donators distrusting [credible] charity groups,” said Hwang Shin-ae, the director of the Korea Association of Fundraising Professionals. “Fundraising organizations should be transparent about where donations were used.”

“Donations help people in need, especially ones who are neglected by the government. This leads to strong social integration between different classes,” said Kim Yeong-sun, the secretary general of the Community Chest of Korea. “I ask for people who are hesitating to donate to help us [reach our goal].”