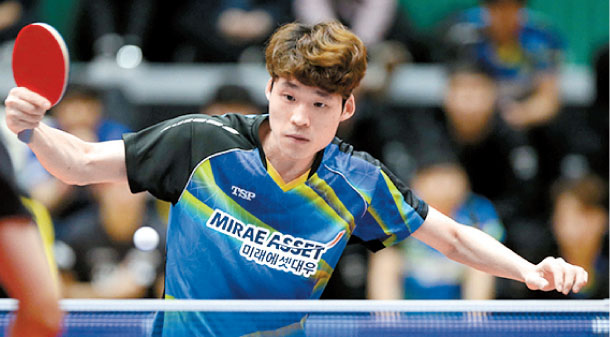 Jang Woo-jin competes in men’s singles final at the Naitonal Men and Women’s Table Tennis Championship at Namdone Gymnasium in Incheon on Sunday. [THE PING PONG]

Despite Cho’s impressive stride throughout the tournament, he was no match for Jang, who got off to a quick start by winning the first set 11-7. Cho responded in the second set with a strong backhand drive to get to deuce, but Jang won the last point to take the second set. Jang easily won the last two sets to get the shutout win against Cho.

This year, Jang has found himself in the spotlight. This season, his world ranking improved significantly, from 41st to 15th and he became the second-highest-ranked male Korean table tennis player in the world, after Lee Sang-su, who is ranked seventh.

Despite a successful junior career, including a win in men’s singles at the 2013 World Junior Championship, Jang struggled when he made the move to the senior ranks in 2015. He frequently made it to the finals of tournaments in his first three years, but he always came up short of winning.

But, that all changed this season.

Jang got his first taste of success this July at the Korea Open in Daejeon, where he won three titles — men’s singles, doubles and mixed doubles. Jang’s victory in mixed doubles received the most media attention because he was teamed up with Cha Hyo-sim of North Korea.

Thanks to his successful season, Jang earned a spot on the International Table Tennis Federation (ITTF) World Tour Grand Finals, where he once against competed in mixed doubles with Cha. Although Jang walked away with a silver medal in mixed doubles, he completed the tournament with another success by winning gold in men’s doubles.

Although Cho lost, he still received a great deal of attention for advancing to the finals. Cho became the youngest Korean table tennis player, at age 16, to advance to the national championship finals.

Prior to Cho, Ahn Jae-young, currently the head coach of the Korean women’s table tennis team, held the record at age 18.

The National Men’s and Women’s Table Tennis Championship is open to all table tennis players, both amateur and professional. The tournament is played according to a randomly assigned bracket, disregarding players’ previous experience.

Last year, Cho also made headlines when he defeated Lee Sang-su at the quarterfinals of the National Championship. When Cho played against Lee, he was ranked as high as 10th in the world. However, he lost to Jang in the semifinals. Although he was knocked out of the tournament in the semifinals, he earned praise for his performance throughout the tournament after defeating four professional players as a amateur.

Cho started playing table tennis in first grade, following his uncle, who used to be a professional table tennis player. By sweeping a majority of the junior tournaments in Korea, Cho quickly became the new hope for Korean table tennis. After taking a year off due to an elbow surgery in 2015, he was able to stage a successful comeback, winning three events at the World Cadet Challenge. Cho’s singles victory made him the second Korean to win a title at the World Cadet Challenge tournament, after Jang.

Cho’s three titles made headlines on the ITTF’s website, as he was an unknown player before the tournament.

In 2017, Cho continued his success, making it onto the Korean junior national team.

In women’s singles, Seo Hyo-won defeated Jeon Ji-hee 4-2 to win the event for the first time in seven years. Seo got off to a slow start by losing the first two sets, but she won the next four sets for an impressive come-from-behind victory.