After suffering from injuries over the past three seasons, pitcher Ryu Hyun-jin of the Los Angeles Dodgers is starting his training for the 2019 season early.

Next year is Ryu’s last season before he becomes a free agent.

This year, Ryu is expected to receive more structured training from his trainer and former LG Twins training coach Kim Yong-il, as he will be traveling with Ryu throughout the 2019 season. 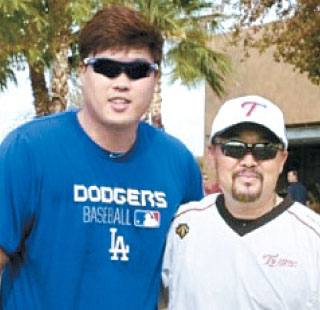 When Ryu made his KBO debut in 2006, he quickly became the best pitcher in the KBO. Despite doing little weight training, Ryu showed power and flexibility, as well as control over his pitches.

Then, once he made his way up to the major leagues, he didn’t make any changes in his training schedule. But after he needed surgery on his left shoulder, he finally started focusing on becoming more muscular.

“Over the last three years, Ryu Hyun-jin has been consistently working on strengthening his muscle,” Kim said. “It’s hard to make a comparison because there’s no data from the past, but his muscle has increased significantly.”

When Ryu joined the Dodgers in 2013, he managed to pick up 14 wins in his first two seasons. Just as his big-league career was taking off, Ryu injured his left shoulder and underwent surgery in May 2015.

Since shoulder surgeries are crucial for pitchers, not many observers expected Ryu to make a successful return. At the time, doctors in Korea expected that Ryu’s career in the majors would end.

Despite negative opinions from the doctors, Kim, now Ryu’s trainer, was confident he would make a successful return.

Throughout the 2016 season, Ryu only appeared in one game. Then, in September that year, he underwent left elbow surgery. Although it wasn’t as serious of a surgery compared to his shoulder, it put pressure on Ryu as he previously also had elbow surgery while in high school.

After his elbow surgery in 2016, Ryu started receiving help from Kim. At the time, Kim was the LG Twins’ training coach.

“In 2016, Ryu Hyun-jin’s condition was at about 60 percent,” Kim said. “Strength and flexibility in his left shoulder were a lot weaker than his right shoulder at the time. Ryu went through four hours of boring training every day.”

Ryu’s hard work slowly paid off. In the 2017 season, he picked up five wins and nine losses. In 2018, he pitched in 82 games and one third of an inning, and picked up seven wins and three losses.

“Since we focused on strengthening his shoulder and elbow, he had problems in his lower body,” Kim said.
In May this season, Ryu missed about three months due to a groin injury.

Although Ryu’s three-month absence could have impacted his last season before free agency negatively, he still finished the regular season strong.

In fact, Ryu became the first Korean pitcher to ever start in a World Series game.

From a successful season, Ryu received a qualifying offer from the Dodgers.

By accepting the offer, he will make $17.9 million through the 2019 season. After the season ends, he will become a free agent once again.

If Ryu manages to keep himself healthy throughout the 2019 season, he will likely be treated as a top-class pitcher by the season’s end when he becomes a free agent.

While Ryu kept repeating the process of injuries and recoveries, he made improvements in the mechanics of his pitches. Ryu kept the speed of his pitches, but managed to improve control in all four of his pitches — slider, curve, cut fastball and circle changeup.

Since Ryu’s statistics for the 2019 season will determine his career, he signed a one-year contract with Kim as his personal trainer.

“Right now, Ryu Hyun-jin’s muscular condition is at 90 percent,” Kim said. “He doesn’t have any pain, but since he has a record of injuries, he’s training thinking that his body condition is at 80 percent. It may be overwhelming to increase the number of innings within a year, but he’s a pitcher that regularly pitched more than 200 innings per year when he was in Korea. He’ll be able to see good results by pitching about 170 to 180 innings next year.”