SEO SEUNG-WOOK
The author is the head of JoongAng Ilbo Japan. 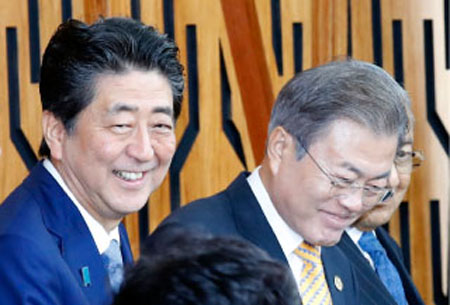 On Dec. 15, Japanese morning newspapers reported on Prime Minister Shinzo Abe’s schedule for the previous day. I was most interested in his dinner plans. At 6:33 p.m., Abe dined with Nihon Keizai Chairman Tsuneo Kita and President Naotoshi Okada at Kashiwanoha hall at Imperial Hotel in Tokyo. He returned to his residence in Tomigaya, Tokyo, at 9:24 p.m.

When I mentioned the dinner of Abe and Nikkei executives to a political news reporter at the newspaper, he said, “You read the newspapers thoroughly.”

Japanese people know well that Abe works out twice a week at Grand Hyatt Tokyo’s fitness club in Roppongi and gets a haircut once every four to six weeks at Hair Guest, a hair salon in Shibuya. Abe’s favorite restaurants are not secrets. As a leader’s time is a public commodity, a prime minister’s schedule is great information by itself and a way to communicate with the people.

I can presume Abe’s interests and administrative direction based on his schedule. From 3:14 p.m. Dec. 14, Japan’s National Security Council chief Shotaro Yachi, Vice Foreign Minister Takeo Akiba, and the foreign ministry’s heads of the European department and international law department were all called to Abe’s office. So I can suppose that they discussed issues involving retrocession of the four northern islands from Russia. While reading Abe’s dinner schedule with Nikkei executives, I wondered if he also would have meals with heads of ATM — or the Asahi, Tokyo and Mainichi newspapers — which are critical of the Abe administration. These newspapers are so critical of the government that people joke that Abe does not use ATMs.

It was President Moon Jae-in who said that a president’s time is not a personal but a public commodity. In January 2017, before he ran for president, he made the remarks at a roundtable talk calling for eradication of abuse of power. He promised that his schedules would be transparently released on a 24-hour basis. He might have made such a unconventional proposal to dramatically differentiate himself from impeached president Park Geun-hye’s controversial seven-hour absence during the Sewol Ferry tragedy in 2014.

Moon’s schedule on the Blue House website’s “public schedule” section mostly includes regular meetings. Some deride the Moon administration for being critical of past ills, yet it is unfathomably generous over its own flaws. I can feel this in Tokyo as a correspondent.