The government is planning to overhaul the current cost-based alcohol-tax system to a quantity-based system, which may address concerns from local alcohol companies about cheap imported beer.

According to the Ministry of Economy and Finance on Tuesday, current taxes on alcohol are based on costs, such as manufacturing or import prices. The government is currently working on a reform that will transition the system, established back in 1969, to a new one based on quantity, such as total volume or alcohol content.

The initiative has been in the spotlight with Finance Minister Hong Nam-ki addressing the issue during his recent confirmation hearing.

The comments come as criticism mounts against importers that reportedly declare low import prices for foreign beer and maintain competitive or even cheaper prices than local beer.

The tax base for local beer is based on the price of beer shipped out from distilleries, which includes costs for production and sales and a margin. For imported beers, the tax is calculated based on the import price paid by the importer and the customs duty. As importers can lower taxes by reporting low prices, foreign beers can maintain price competitiveness against local offerings. 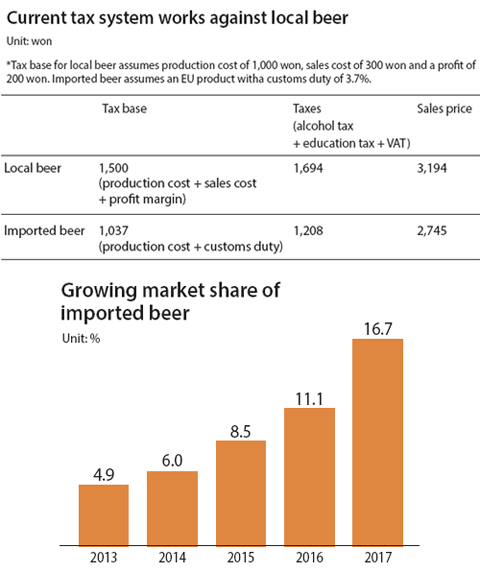 Local beer companies have argued against this cost-based tax system, saying it is a form of discrimination against Korean manufacturers.

“The tax rates are identical, but because the tax base is high, there is a twofold difference,” said Kang Seong-tae, chairman of the Korea Alcohol & Liquor Industry Association at the annual National Assembly audit in October.

The favorable tax system has allowed for the competitive pricing of imports and an increasing market share for foreign beers, rising to 16.7 percent last year from 4.9 percent in 2013.

While the tax change may provide a level playing field, it raises concerns that widely popular promotions in which four beer cans are sold for 10,000 won ($8.89) may not survive the reform.

The change, however, is unlikely to eliminate the promotions altogether.

The government is considering a plan to introduce alcohol taxes of 850 won per one liter (33.8 ounces) of beer. The current average beer tax works out to roughly 850 won per liter, though it is calculated in a different way.

Beers from these countries will likely attract a lower tax after the reform.

With the introduction of a quantity-based system, taxes levied will become lower and the current promotions of four cans at 10,000 won will likely remain.

However, promotions of six cans for 10,000 won will probably disappear as cheap imported beer will face higher taxes.

“[We] will establish a reform plan for alcohol tax as early as the first half of next year by conducting research and gathering opinions,” said Kim Byung-gyu, director general of the Tax and Customs Office at the Finance Ministry. “[We] have an objective to ensure overall fairness in taxation and make changes without increasing the burden on the consumer.”