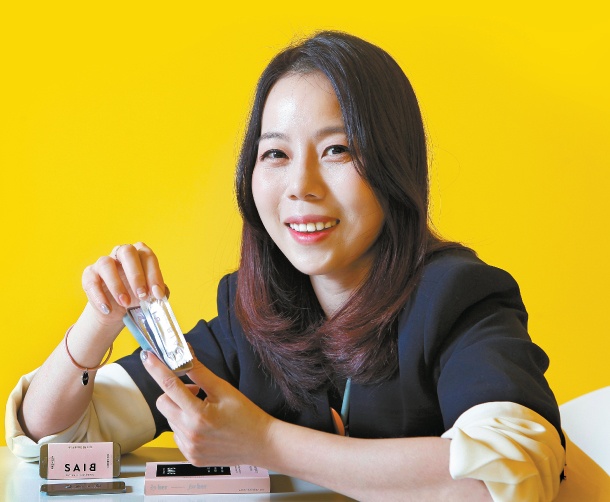 For many, buying condoms at a store is still quite an embarrassing experience, at least in Korea, where traditional Confucian values still course through society. So people tend to bury condoms under other products in their shopping baskets rather than linger in front of the condom section to compare the various offerings.

Local condom maker Saib & Co. (SAIB), however, would like to redefine condoms as “intimate cosmetics for sexual well-being” and make the product widely accessible to both men and women.

“People care so much about what ingredients make up the cosmetics they put on their faces these days,” said Park Ji-won, a 33-year-old graphic designer and CEO of the roughly 10-month-old start-up, as she sat down for an interview with the Korea JoongAng Daily last month in Seoul. “But if you think about it, condoms actually go into your body.”

Park admits she had not bought or thought seriously about condoms until she was in her late 20s.

“That seemed natural to me being born and brought up in Korea, but as I began teaching design as an assistant professor at the University of Texas at Austin in 2013, I was shocked to see students openly discussing issues related to condoms and unprotected sex during class,” she said. “I felt kind of embarrassed for not knowing much about a product that is so related to women’s health.”

Park decided to challenge traditional views on condoms by making them friendlier to women’s bodies and by designing cool packaging to make condoms look more like daily cosmetics people can carry around without shame or stigma.

Light pink is the dominant color for SAIB condoms, unlike many other products already in the domestic market that are covered in black or other dark colors. Some even have a male figure with a wicked smile on the packaging. The start-up was the winner of the brand design award at this year’s Red Dot Awards, one of the largest design competitions in the world.

“We are starting out with condoms, but I hope to empower women in various ways through our business,” Park said.

The following is an excerpt of the interview with Park. 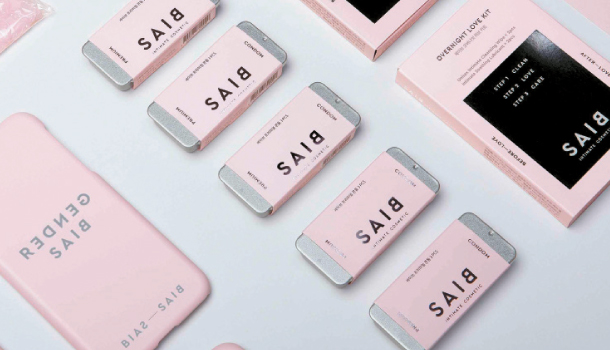 Q. Why did you name the company as SAIB? Is there a special meaning attached to the word?

A. It’s actually an inversion of the word bias. Though using condoms is the easiest way to have safe sex, the rate of condom usage in Korea stood at a mere 11.5 percent in 2015, the lowest among all member countries in the OECD. The reluctance to use condoms is rooted in cultural bias, especially in Korea where the society is still patriarchal and conservative. This makes it hard for women to carry condoms or ask their counterpart to use condoms.

So our first goal actually was to increase the overall use of condoms for contraception. And by making them look more desirable and pretty, we want women to be able to become strong purchasers of condoms for their own protection. We also tried to take out all the materials that can be harmful to women’s body.

You talked about your teaching experience in 2013. Why were condoms mentioned in class?

The first design project I assigned to students was to come up with an idea to address or tackle social problems using design methods, and one student made artwork using free condoms distributed by the university to address the issue of unprotected sex. In Korea, that kind of presentation could have created a very awkward atmosphere.

Did that project motivate you to start the company?

Well, it was a good trigger, but I didn’t immediately think I should make condoms myself then. It was early last year after a meeting with acquaintances who were working in the cosmetics industry I finally decided to launch my own brand. At the meeting they - who were both male - talked about how cosmetics market in Korea is saturated and they need new breakthrough products. Then one of them said recent market trend in Japan is to create completely new cosmetics segment by making women feel shameful about their body, such as by pointing out the color of nipples and sexual organs should be whitened. I was frustrated with them trying to make profit out of women’s anxiety. Those whitening creams probably do no good for women’s health. So I told them “Do you know what’s really necessary? A good selection of safe and well-made condoms for women.”

What ingredients in condoms are good or bad for the body?

Well, there are many ingredients applied to condoms to increase pleasure during relationships, but are better taken out when considering health. Special products made for a longer sexual experience, especially, may contain materials harmful to a women’s body. So what I focused on was to take out as many unnecessary additives as possible, like glycerin, synthetic fragrance and artificial pigments.

Making a new type of condom was harder than expected because they are categorized as medical devices, not cosmetics. It takes three to five years to fix something and get approval for sales. Also in Korea there are only two major condom manufacturers, though there are numerous condom brands. This dominance puts start-ups like us in a difficult position to make special requests, like taking out certain materials from the condoms. When I went to the factory to explain my condom designs they weren’t happy with a young woman trying to challenge the mainstream condom industry.

Where can we find SAIB condoms?

At 7-Eleven and Pierrot Shopping offline stores in Korea, as well as the SAIB and the Ten by Ten online websites. Some offline adult product shops also have them. We were lucky to enter the 7-Eleven convenience store chain, because according to our market research about 90 percent of people buy condoms at convenience stores.


How do you market your products?

We are slowly establishing offline sales networks. There are limitations to marketing our products online, actually, because in Korea condoms are strictly categorized as adult products, and teenagers can’t even find search results on condoms on dominant portal sites like Naver. I was kind of surprised because I thought IT companies, at least, would be more open.

This means teenage students who need to be educated about condoms don’t get that because they can’t even find information. I don’t think blocking people from access to condoms is the best way. Rather, condoms should be more widely provided for safe contraception.

I heard you will use 10 percent of your earnings into running campaigns for gender equality and women empowerment.

Yes. Selling prettier condoms cannot solve the problem we have in our society right away. People’s perception needs to change for women to have a stronger voice in protecting their body while having sex. According to research by Seoul National University Borame Medical Center, more than 60 percent of Korean women do not use any form of contraception and rely on their partners for birth control. I hope to run various campaigns in partnership with women rights groups and other interested parties to empower women in the long run.

Do you have anything to say about feminist movements in Korea?

I think Korea is a developed country considering its economic level and IT infrastructure, but in terms of feminist movements and discussions on diversity, the country is still at its infancy. When I look at feminist activities in Korea, it reminds me of 70’s in the United States, when female workers had very weak standing compared to male workers. Then, activists were aggressive in making their voices heard and they tried to reject femininity. I think Korea, too, is going through a transition period right now.

I personally am a feminist, but it doesn’t mean I want to give up femininity to be treated equally as man. I would hate to give up femininity. I don’t think the goal of feminism is to make every female become like a male. The real goal is for females to be respected for who they are. I hope the feminist movements in Korea become more open and develop in a way that they can embrace femininity.