[Test drive] The new Camaro is a serious sports car

[Test drive] The new Camaro is a serious sports car

YONGIN, Gyeonggi — The Camaro may not have been exclusively designed with snow and ice in mind, but when faced with Korea’s freezing winter it handles itself just fine, holding on to its American muscle roots.

Unfortunately, the original driving course on the Yongin AMG Speedway racing circuit scheduled by GM Korea was canceled due to the weather conditions, and a short 30-minute winding course was prepared outside the track to test the sports vehicle.

Despite the weather, the partial update to the sixth generation Camaro that features an eight-cylinder 6.2 liter engine with 10-speed automatic transmission fared well on the slippery hill roads covered in melting snow.

Even without winter tires, the vehicle made up for the lack of traction on the road with its Snow/Ice mode, which held the car steady without any sign of slipping. The driving mode is one of four — the others are Tour, Sport and Track.

With a new powertrain that produces up to 453 horsepower, steep inclines were no issue as the vehicle rumbled through the quaint hillside roads. 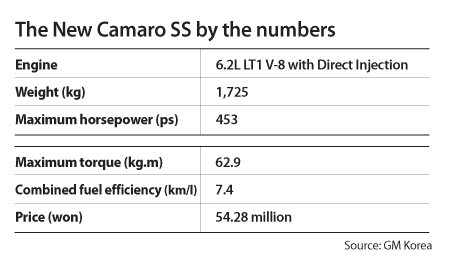 Meanwhile, the acceleration was explosive and instantaneous, as the sports car changed gears to speeds of over 110 kilometers per hour (68.4 miles per hour) in what felt like seconds with plenty of room left over for even higher speeds.

It was a shame that the course didn’t feature a straight stretch to actually test out GM Korea’s promised zero to 100 kilometers per hour in just 4.0 seconds.

During the winding course, the Camaro also took on corners without any trouble as it produced quick steering without having to worry about oversteer.

Dodging cones spread out in a narrow course, the Camaro, driven by a racing instructor, accelerated and braked without skipping a beat, showing off its performance prowess.

The new Camaro’s dramatic acceleration — complete with screeching tire noises — and responsive steering lives up to its sporty image.

Performance aside, driver visibility is an issue. The Camaro’s windshield is relatively narrow and with the visor down, the view gets even more crowded.

The automaker compensates for the small rear windshield with a rear-camera mirror. Instead of solely relying on the traditional rear-view mirror, a display connected to the car’s rear camera shows the rear view.

While the display mirror makes up for the lack of visibility, its slightly-grainy image quality in bad weather conditions may be bothersome for some.

The interior features a premium look with ambient lighting in 24 colors, a heads-up display and an 8-inch infotainment display system. The infotainment display, however, has protruding outer bezels that make it seem as if it is facing slightly downward, which could prove to be distracting.

While the new Camaro is a rare muscle breed on Korean roads, the new facelift may not be that impressive to long-time fans.

The iconic Chevrolet bowtie emblem originally placed on the upper grille of the previous Camaro has now been shifted down to the bumper beam, leaving an awkward impression. The bumper beam also comes in a dark grey color, unlike the previous models that matched the color of the overall car.

While the designers were likely going for a seamless look for the beam and the glossy black grille, the overall design of the front will likely draw polarizing reactions.

Minor quality control issues may also be a problem. On one of the displayed models at the event, the door handle on the passenger’s side wobbled slightly. While the issue wasn’t apparent on other Camaros at the event, it was disappointing for a high-end vehicle.

GM Korea is keeping the Camaro’s price relatively low to appeal to Korean consumers. The new Camaro SS comes in two options with the regular model at 54.28 million won ($48,050) and a Volcano Red Edition with a red interior at 55.07 million won. A similar spec Ford Mustang costs upwards of 60 million won.