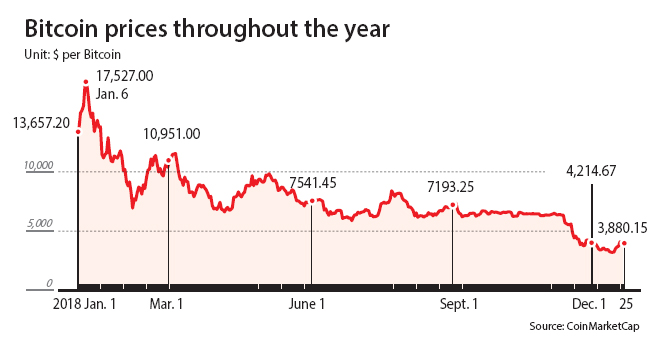 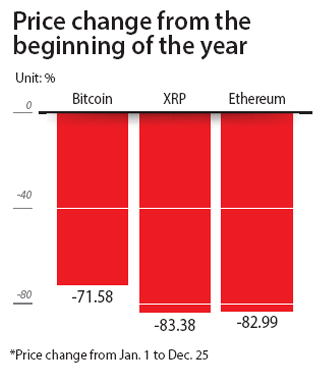 The cryptocurrency market has experienced a slump this year. Korea’s “crypto craze” has all but disappeared, with cryptocurrency prices and investor sentiments hitting rock bottom in the last few months.

Bitcoin prices have tumbled around 70 percent from the start of this year. According to cryptocurrency information provider CoinMarketCap, the price of one Bitcoin stood at around $14,000 at the beginning of the year: it had fallen to $3,880.15 as of 11:55 a.m. on Dec. 25.

Other cryptocurrencies have also suffered plummeting prices over 80 percent, such as Ethereum and Ripple’s XRP.

One of the major reasons behind the market slump is panic selling. After falling past the $4,000 mark on Nov. 25, Bitcoin owners began selling en masse around the world.

“Hard forks,” a term that describes a cryptocurrency being split, often in a new token, due to a lack of consensus in the community, have contributed to the falling prices. Cryptocurrency miners who solve cryptographic problems to earn cryptocurrency have led such hard forks.

Cryptocurrencies such as Bitcoin Cash and Bitcoin Gold are examples of hard forks from the original Bitcoin. The hard forks have caused confusion and concern in the market.

“The conflict between miners and developers over hard forks have led to greater uncertainty in cryptocurrency and investors have resorted to mass selling,” explained cryptocurrency expert Lee Yong-jae.

A recovery in prices in the short term looks unlikely.

“With a variety of regulations, new cash isn’t flowing in, so it is difficult to assume that prices will rise,” said Han Dae-hoon, head of research at Chain Partners, a company that specializes in investing in blockchain companies.

“If a Bitcoin exchange-traded fund is approved next year in the United States, funds flowing in from financial institutions may be expected,” said Lee. “However, it is difficult to predict such a rosy future with all the legal codes and regulations.”

The Korean government’s regulations on the cryptocurrency market have also dampened the crypto fever that dominated the country.

Minister of Justice Park Sang-ki’s comments in January that the government was considering shutting down cryptocurrency exchanges led many investors to leave the market altogether.

The Chinese government pursued even greater measures to clamp down on the market. After banning initial coin offerings (ICOs), the cryptocurrency equivalent to initial public offerings (IPOs), last year, the country also closed down cryptocurrency exchanges.

The regulations introduced by the two countries that led much of the global cryptocurrency market noticeably reduced the capital inflow.

Hacks into cryptocurrency exchanges this year have also dragged the overall market down, sparking fears of security.

Investors, who had always been wary about the market’s rapidly fluctuating prices, were suddenly worried they might lose their assets completely.

Three officials of the company that operates Upbit - Korea’s second-largest cryptocurrency exchange - were indicted on Dec. 21 on fraud charges. The officials are being accused of market manipulation and defrauding people out of 149.1 billion won worth of cryptocurrency by trading with an account that was made to look like it held 100 billion won.

The company responded, “There has been no instances of trading non-existent cryptocurrency or taking in unfair profit.”

Despite the reports of security breaches and manipulation, the government has yet to come up with a clear regulatory guideline for the cryptocurrency market.

“For investor protection from weak security systems or scams, the government needs to provide a legal and regulatory foundation,” said Han.