Mobis to put screen in windshield

Mobis to put screen in windshield 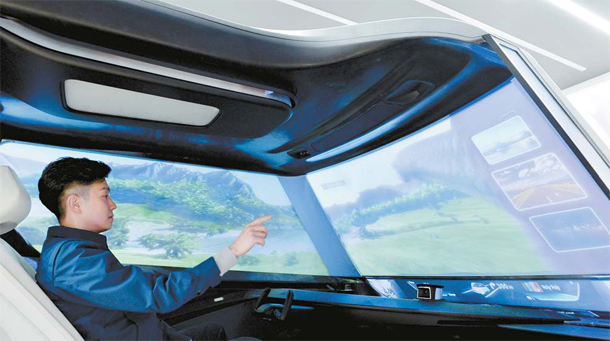 Your car windshield will one day become your very own movie theatre, controlled by nothing more than a hand gesture, when auto parts maker Hyundai Mobis’ futuristic infotainment system makes its way into high-level self-driving vehicles.

The Korean company will give a first-hand look at its infotainment system concept for Level 4 and 5 autonomous vehicles - cars that can drive themselves without being actively monitored by the driver - at the world’s largest electronics exhibition, the Consumer Electronics Show (CES), in January in Las Vegas.

According to Mobis, the windshield will evolve into a whole panel of displays in the future. To ensure driving is still safe, windshields will remain transparent when cars are being driven manually, but when the vehicle is driving itself the windshield will become a dark display panel used to view everything from navigation updates to movies. Currently, cars in the market use only part of the windshield for heads-up displays, which tell drivers information on upcoming turns and speed limits so they don’t have to look away to check on navigation.

In link with the next-generation display, the auto parts maker will show off what it calls a “visual touch technology.” This technology enables passengers to control the infotainment system with a simple hand gesture in the air. A camera inside the car will read eye movements and hand gestures so that the car knows which part of the menu the driver would like to change.

The auto parts maker said the same camera will also be able to analyze drivers’ faces to find out how they feel and adjust lighting and music inside the car in accordance with their mood. This way, the car knows what to do even before drivers’ move their hands.

“This year at CES, Hyundai Mobis will give attendees, and the world, a broad-spectrum view of how the vehicle of the future will evolve as the role of the driver transitions into a passenger,” said Chang Jae-ho, senior vice president and head of the electrical and electronics R&D center at Hyundai Mobis.

It will be the Korean company’s fourth consecutive year participating in the world’s largest consumer technology show. It is setting up a 4,700 square foot exhibit focused on autonomous driving, as well as automotive lighting solutions and hydrogen fuel cell technology.