This year’s trends in Korean film: Women, word-of-mouth define 2018 at the cinema

This year’s trends in Korean film: Women, word-of-mouth define 2018 at the cinema 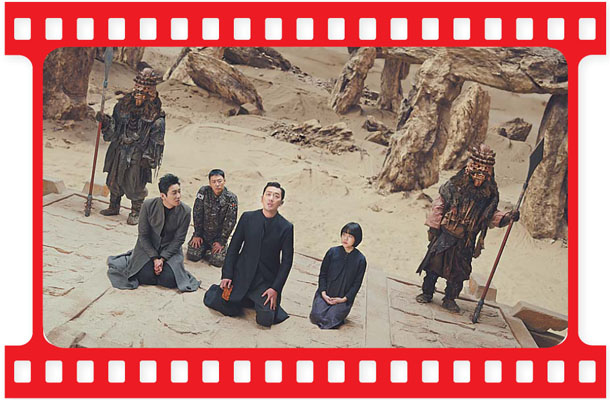 The growing prevalence of movie streaming giants like Netflix is worrying many cinema chains, but these new filmmaking giants actually had a limited impact on Korean cinema this year.

Local cinemas sold more than 200 million tickets this year for the sixth consecutive year since 2013, according to the data provided by the Korean Film Council.

Apart from ticket sales, several key characteristics that defined this year’s Korean cinema trend are the growing importance of word-of-mouth, stronger female characters and the success of smaller-budget movies over blockbusters.

One of the biggest beneficiaries of strong word-of-mouth was “Bohemian Rhapsody,” the film about the British rock band Queen and its lead singer Freddie Mercury. The film debuted on Oct. 31 to moderate success.

But it received positive word-of-mouth and reviews. Thanks also to the popularity of sing-along screenings, the film climbed up the box office ladder and managed to stay strong despite the unleash of new releases. In its eighth weekend, its total ticket sales amounted to 8.5 million.

“‘Bohemian Rhapsody’ was also popular among younger audiences, who did not grow up listening to Queen’s music,” said Hwang Jae-hyun, a spokesman for CGV. He also pointed to “strong word-of-mouth” as the key to the film’s success in attracting younger viewers into theaters. 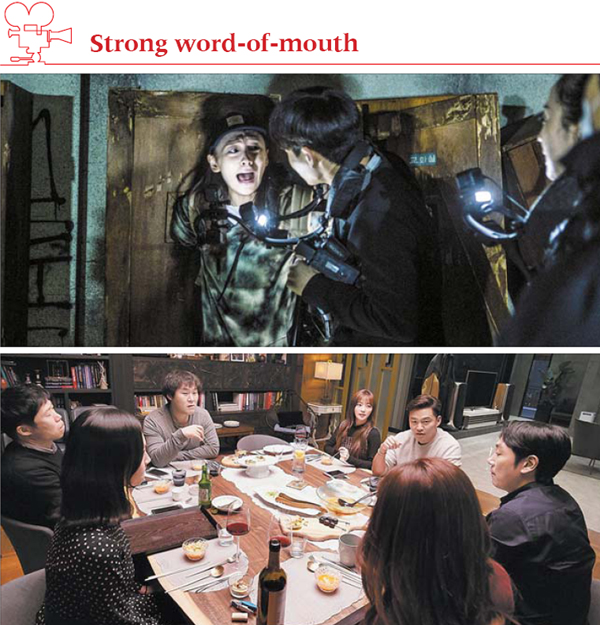 Other movies that received an unexpected boost from the public buzz include the horror mystery flick “Gonjiam: Haunted Asylum,” comedy drama feature “Intimate Strangers” and the drama “Searching.”

“Gonjiam,” which tells the story of a group of seven people going on an adventure to the abandoned Gonjiam Psychiatric Hospital and filming their experience along the way, far exceeded break-even ticket sales of 600,000. Despite being made for less than half of the average production cost of Korean movies, “Gonjiam” managed to sell 2.67 million tickets. This is particularly surprising, as the entire cast was made up of rookie actors.

The movie depicts a group of childhood friends and their spouses playing a game that requires them to reveal all their text and phone calls. It received a positive response from viewers. Despite film journalists’ criticisms of the plot’s simplicity, “Intimate Strangers” received a rating higher than nine stars out of 10 on portal site Naver’s film rating system, far higher than the critics’ rating of 6.13.

“Searching,” starring Korean-American actor John Cho, is another movie that succeeded through positive word-of-mouth. The film is about a single father desperately attempting to find his missing teenage daughter, and it was moderately successfully after its Aug. 29 release. But after viewers praised the film for taking an unconventional approach to storytelling - the film takes place entirely on computer screens - the movie topped the box office for a couple of weeks, selling a total of 2.95 million tickets.

Another notable trend this year is the growing significance of strong female characters.

Period epic “Herstory,” about the struggles of women who were forced into sexual slavery by the imperial Japanese army during its colonial rule in Korea (1910-45), depicts independent and strong-willed women trying to speak up for women’s rights.

Kim Hee-ae plays the head of a Busan-based tour agency who helps comfort women launch their court case against the Japanese government. 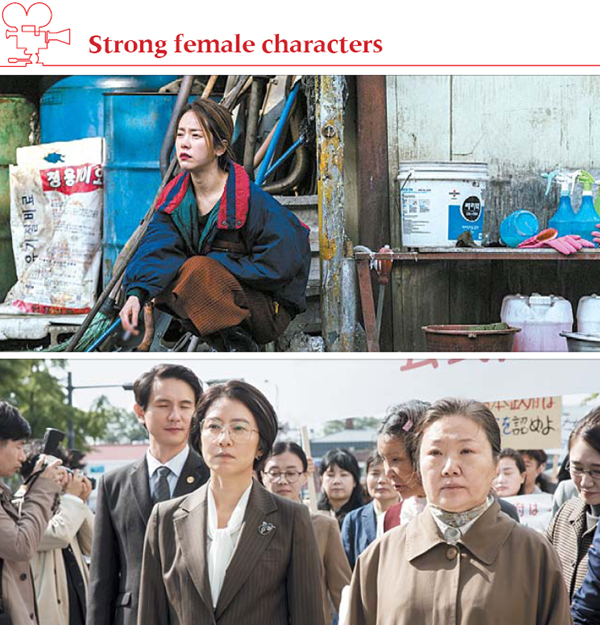 “Miss Baek” is another notable film with a strong female lead. The movie explores child abuse through the eyes of a socially excluded female character. It received a lot of support from audience members welcoming a rare movie that places a female character at the center. Its main star Han Ji-min won a number of awards, including the Blue Dragon Awards, for her role in the film.

Rookie actor Kim Da-mi was also at the center of attention this year for her charismatic role in “The Witch: Part 1. The Subversion.” In the action-packed movie, Kim plays a mysterious high school student with superpowers who struggles to live a normal life.

Films like “Illang: The Wolf Brigade,” “Rampant” and “Psychokinesis” proved that high production costs is no longer a prerequisite for a movie to hit the jackpot.

“Illang,” which cost around 16 billion won to make, sold less than a million tickets. This comes especially as a surprise due to its strong star cast, including popular actors Gang Dong-won, Han Hyo-joo and Jung Woo-sung, and the involvement of Kim Jee-woon (“The Age of Shadows”) in the director’s chair. Fantasy period title “Rampant,” starring Hyunbin and Jang Dong-gun, was another highly anticipated big-budget flick. 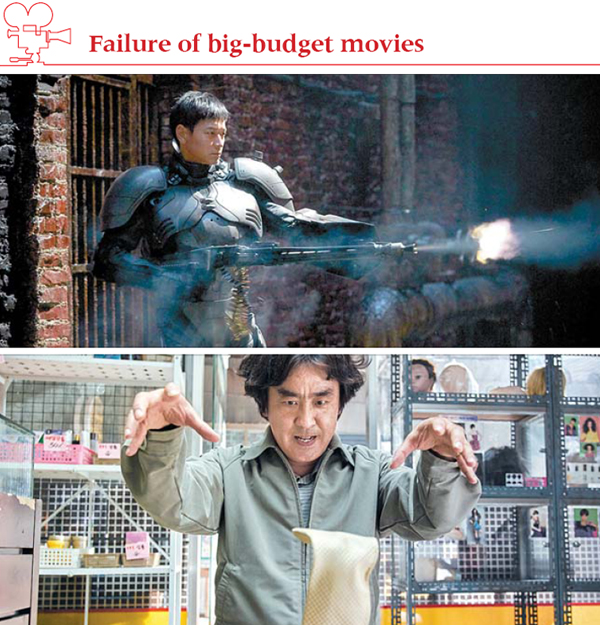 However, it sold only 1.59 million tickets, which was a huge disappointment due its production costs of 17 billion won. Yeon Sang-ho’s new feature “Psychokinesis,” which followed the massive success of zombie thriller “Train to Busan,” also fell short at the box office. Despite costing more than 13 billion won to make, it attracted less than a million moviegoers.

In contrast, movies like “Dark Figure of Crime,” “The Witness” and “Little Forest” also proved that films with smaller budgets could be strong enough to become box office hits.

“The success of a movie is no longer decided by high production costs or strong star power,” said film critic Kim Heon-sik. “Audience members have started to look for a trendy and unique story that does not repeat what they have seen in the past.”