The main opposition Liberty Korea Party urged Democratic Party Rep. Kim Jung-ho to step down from his parliamentary seat on Tuesday after a conservative newspaper accused him of mistreating a security agent at Gimpo International Airport in Seoul last Thursday.

The report instantly caused public backlash against Kim, who represents the Gimhae B District of South Gyeongsang.

He is accused of being the latest example of Korean lawmakers’ gapjil, or abuse of power. 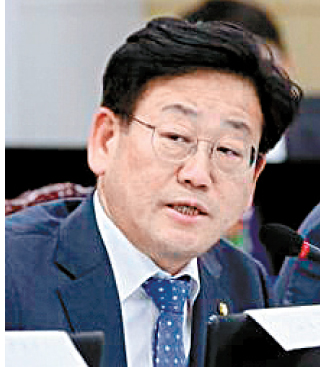 A spokesman for Gimpo International Airport’s security staff under the Federation of Korean Trade Unions said on Tuesday that Kim personally called the worker around 11 a.m. that day to apologize for being rude.

The worker, a 24-year-old man surnamed Kim, said he accepted the apology and wouldn’t make an issue out of the incident, according to the union organization.

Last Thursday night at Gimpo airport in western Seoul, the lawmaker was going through a security check at a departure hall to board a flight to Gimhae International Airport in Busan.

According to a report detailing what happened that day submitted by the agent to the airport, he asked Rep. Kim to show his ID.

Rep. Kim flipped out his wallet and displayed the front side of his ID through a clear window.

The security agent asked Rep. Kim to take the ID out of the wallet to check whether it was authentic, but the lawmaker refused to comply.

Fuming, Rep. Kim said he was a member of the parliamentary Land, Infrastructure and Transport Committee and that he’s never been told to take his ID out before.

Rep. Kim then asked the security agent whether it was in the rulebook that he had to take his ID out of his wallet, and started taking photos of the security worker with his cell phone.

According to the Chosun Ilbo, which broke the news last Saturday, Rep. Kim hurled expletives at the airport staff as they approached him with a thick security rulebook and struggled to search for the regulations to support their stance.

At one point, the lawmaker told his aide to call the airport’s president.

As the departure time approached, Rep. Kim boarded the plane without taking out his ID, telling his aide to handle the situation, the Chosun Ilbo reported.

Rep. Kim admitted to Chosun Ilbo that he yelled at the security agents but denied any swearing.

He said that he was raising a question as a representative of the general public because he had never heard of a rule that said he needed to take out his ID.

The airport’s manual reads that security agents are required to “see and feel” a passenger’s ID to verify whether it is authentic.

Rep. Kim held a press conference Tuesday afternoon to apologize to the public.

He said he was deeply sorry for disappointing society with his “shameful speech and behavior.”