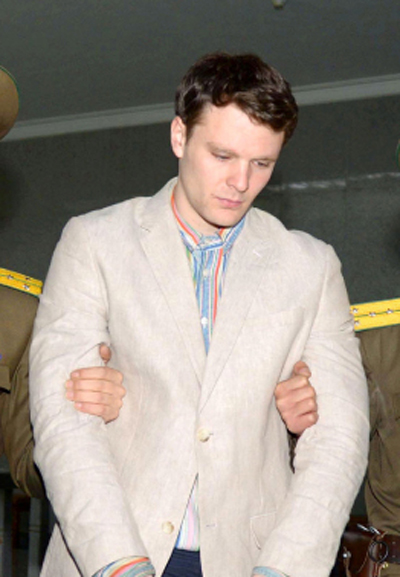 A U.S. court ruled Monday that the North Korean government must pay over $501 million in damages to the parents of Otto Warmbier, the American college student who died after being detained by the North last year.

The U.S. District Court for the District of Columbia made the ruling more than a year and a half after the 22-year-old Warmbier died in June 2017.

This was shortly after he was returned to the United States in a coma after more than 17 months of imprisonment in North Korea.

A federal judge found North Korea “liable for the torture, hostage taking, and extrajudicial killing of Otto Warmbier, and the injuries to his mother and father, Fred and Cindy Warmbier.”

Warmbier, a University of Virginia student, traveled on a five-day group tour trip to North Korea on Dec. 29, 2015. He was arrested in North Korea in early January 2016 for allegedly stealing a propaganda poster.

He confessed to “severe crimes” against the state in late February in a confession that is believed to have been coerced. He was sentenced to 15 years of hard labor that spring for state subversion, though he was sent to the United States in a coma in 2017.

The decision noted that North Korea was re-designated by the U.S. State Department as a state sponsor of terrorism in November 2017, “in part due to Otto’s detention and abusive treatment resulting in his death.”

North Korea was previously delisted in October 2008 by the George W. Bush administration. It was initially designated in 1988 after bombing a South Korean passenger jet in 1987.

The Donald Trump administration’s designation of North Korea as a state sponsor of terrorism enabled the Warmbiers to file the suit against North Korea. Individuals are usually not allowed to sue foreign countries under U.S. law.

The state sponsor of terrorism listing also bars North Korea from membership in international financial institutions, putting a damper on its goal of economic development.

The Warmbier estate is entitled to $6 million in economic losses, over $96,000 in medical expenses, $15 million in pain and suffering, and $150 million in punitive damages, the court ruled.

Fred and Cindy Warmbier are each entitled to $15 million in damages for the emotional distress they experienced and a total of $300 million in punitive damages to punish and deter such conduct by the North Korean government in the future.

The economic losses are meant to compensate for the wages that Otto Warmbier would likely have earned had he not died, taking into account that he was a top economics student with a promising future.

“North Korea is liable for the torture, hostage-taking, and extrajudicial killing of Otto Warmbier, and the injuries to his mother and father, Fred and Cindy Warmbier,” Chief Judge Beryl Howell of the U.S. District Court for the District of Columbia wrote in the opinion, issued on Christmas Eve.

The court opinion described Warmbier as an economics student in his junior year at the University of Virginia, a high school class salutatorian, homecoming king and prom king.

“He was blind, deaf, and brain dead when North Korea turned him over to U.S. government officials for his final trip home,” Howell continued.

The Warmbiers initially filed the wrongful death lawsuit in April and sought more than $1 million in damages from the North Korean government. An evidentiary hearing was held on Dec. 19.

“We are thankful that the United States has a fair and open judicial system so that the world can see that the Kim regime is legally and morally responsible for Otto’s death,” Fred and Cindy Warmbier said in a statement.

They added that they are “undergoing the ordeal of a lawsuit and public trial because we promised Otto that we will never rest until we have justice for him” and called the court opinion “a significant step on our journey.”

Pyongyang and Washington do not have formal diplomatic ties, so it is unlikely that Warmbier’s parents will be rewarded the full sum of money from the cash-strapped nation.

The damages awarded to the Warmbiers will likely come from North Korea’s frozen U.S. assets, which amounted to over $63 million in 2017, according to the U.S. Treasury Department’s Terrorist Assets Report.

However, the Trump administration could seek compensation for the Warmbiers as part of a nuclear deal with North Korea.

Washington has been cracking down on North Korea for human rights abuses this month, including sanctioning three top Pyongyang officials for rights violations and censorship.