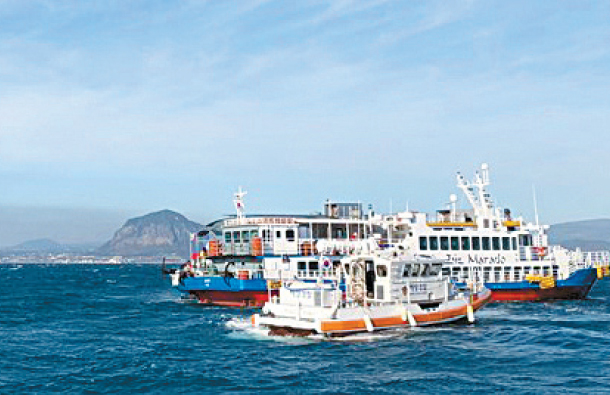 Marine authorities rescue 195 passengers from a ferry that ran aground in the waters off Jeju Island on Monday. All the passengers were rescued safely. [YONHAP]

A ferry carrying around 200 people ran aground in the waters off Jeju on Saturday, but all the passengers were rescued within 80 minutes.

The ferry was making a 5.6-mile trip between Mara Island and Unjin Port on Jeju Island. It was carrying 195 passengers and four crew members when it set sail from Mara Island around 2:25 p.m. Monday. After 20 minutes, it hit something underwater.

“The vessel came to a stop after a loud thud,” said Lee Sang-shin, one of the passengers on the ferry. “Then there was an announcement that told us to put on the life jackets.”

The ferry crew called marine authorities for rescue, and they transferred all 195 passengers to a vessel that reached Unjin Port at around 4:05 p.m. The ferry, a 199-ton vessel, was towed to the port with four crew members, including the captain, remaining on board. A part of the steering room was found to have flooded.

“After the ferry ran aground, there were reports that water was coming into the ferry,” said Koh Seung-ho, the captain of the ferry. “When I heard that, we focused on getting the passengers onto other vessels.”

“All 199 were rescued, it’s a Christmas miracle,” one user posted on Twitter on Monday.

Authorities suspect the ferry hit a rock underwater and are currently investigating the cause.

The case echoed the sinking of the Sewol ferry, which capsized in the waters near Jeju Island in 2014. The disaster killed more than 300 people, most of them high school students on a trip to the island. The captain of the ferry was among the first to leave the sinking ferry, and some crew members told passengers to stay put.

“This time, thanks to the captain’s calm and immediate response to the accident, everyone was rescued safely,” a user wrote on Twitter on Monday. “It makes me angry to think that the same could have been possible when Sewol ferry sank. Back then, the captain and the crew were among the first to abandon ship.”

“The rescue result is great news, but I’m sure I’m not the only one thinking of the incident years ago,” wrote another user on Twitter. “We will always remember the victims.”