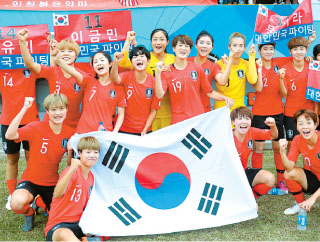 The Korean women’s football team poses for a photo after winning bronze at the 2018 Asian Games on Aug. 31. [YONHAP]

The Taeguk Ladies, led by head coach Yoon Duk-yeo, will compete in a four-nation tournament to be held in Meizhou, Guangdong province, in China from Jan. 17 to 20, the KFA said. The tournament will feature China, Romania and Nigeria, the latter of which is in the same group as Korea for the 2019 Women’s World Cup.

Korea - ranked 14th in the latest FIFA ranking - has been placed with host France, as well as Norway and Nigeria, in Group A for the top women’s football tournament.

At the four-nation tournament in China, Korea will first meet Romania on Jan. 17 and, depending on the match result, they will play in the third-place match or the final on Jan. 20.

The KFA said 26 players will participate in the tournament in China. The squad includes such key players as Chelsea Ladies FC forward Ji So-yun, veteran midfielder Cho So-hyun and the 2018 KFA Women’s Player of the Year Jang Sel-gi.

The players will assemble on Jan. 10 at the National Football Center (NFC) in Paju, north of Seoul, and will fly to China next day.

“We will focus on checking our players’ form and reinforcing our team plays,” Yoon said. “We might face Nigeria at the tournament, and since they’re the opponents that we must beat at the World Cup, we want to collect good results if we meet them.”

The KFA said after the Chinese tournament, Korea will enter another World Cup tuneup tournament in Australia that starts on Feb. 28. This four-nation tournament will feature host Australia, New Zealand and Argentina - all participants of the 2019 Women’s World Cup - and will be played in a round-robin format, according to the KFA.

Korea will open the tournament against Argentina on Feb. 28 in Sydney and will take on Australia in Brisbane on March 3. The Taeguk Ladies will meet New Zealand on March 6 in Melbourne, the KFA added.