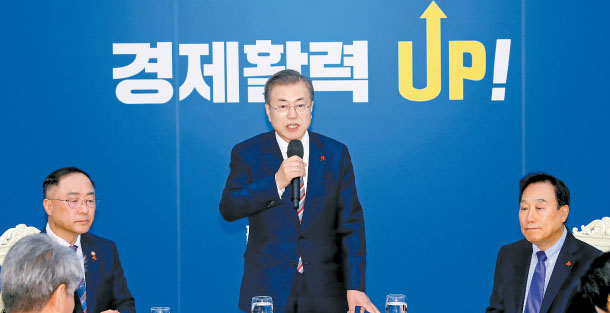 “Legal holiday pay was set out 65 years ago in the Labor Standards Act of 1953,” Hong said during an economic ministers meeting Wednesday. “It’s not something new.”

The finance minister noted in particular that it was not the government’s intention to increase the burden on companies or to raise the minimum wage in a roundabout way. He said it was rather an effort to make sure wages were maintained at their legal levels.

On Christmas Eve, the government said that, starting in 2020, it would include paid holidays when calculating the hourly wages of workers.

The business community responded quickly, saying that the requirement would raise costs for companies and could lead to smaller businesses paying less than the legal minimum.

Under the law, Sunday is considered a paid holiday. Average hourly wages are calculated by dividing total weekly earnings by all the hours, including a full day of Sunday hours. This results in a lower average wage than if the calculation were made by dividing total earnings by the actual number of hours worked.

The rules apply to any person working more than 15 hours a week.

If an employee works eight hours a day from Monday to Friday, that employee would actually be on the job for 40 hours a week, but the law says that hourly wages should be determined by including another day of work, in this case, eight additional hours.

If an employee works 174 hours in a month, the total hours worked will be booked at 209. In many cases, especially at companies paying the lowest legal wages, the pay adjusted according to the rules will be lower than the minimum wage.

Total pay will have to be increased, while companies not doing so could face legal jeopardy. A violation of the regulation can result in up to three years in prison or a fine of not more than 20 million won ($17,760).

The finance minister said the problem wasn’t the minimum wage policy but rather the practice in which companies set the basic wage low and pay out a significant amount of compensation through bonuses. He said this was the main reason why even well-compensated employees working at conglomerates could technically be paid less than the minimum wage.

He added that he is frustrated that labor unions are demanding that other holidays be included in the calculation. This could include Founder’s Day holidays and even Saturdays.

“This is not an issue that the labor community should be criticizing,” Hong said, noting it would not be reasonable to use 243 hours a month as the denominator in the equation.

The government estimates that when the extra holidays are included, the working hours would increase from 209 hours to 243, which could further shrink the hourly pay.

The minister said that the government will be working to improve regulations related to the 52-hour workweek, seeking ways to make the requirements more flexible. The goal is to reach an agreement with the National Assembly by the end of February.

“The government will continue to work on making regulatory improvements to labor-related policies, including raising the minimum wage and shortening the hours,” Hong said, while asking the business and labor communities to cooperate.

Despite the minimum wage being the center of attention, during the meeting hosted by President Moon Jae-in on Wednesday and attended by Finance Minister Hong and Kim Kwang-doo, vice chairman of the National Economic Advisory Council, the subject was barely mentioned.

According to Blue House economic adviser Kim Hyun-chul, only Sung Tae-yoon, a Yonsei University economics professor, brought it up, saying the government should devise measures to cushion the blow of the wage increase and provide incentives for job creation.

Council Vice Chairman Kim only reported on the direction that the country should take to enhance the competitiveness of industry in order to create quality jobs and boost economic momentum.

Expectations were high that Kim would harshly criticize the government’s minimum wage policy, which he has done on previous occasions. Kim was reported to have tendered his resignation, though this has been denied by President Moon.

The government offered up a plan to help develop young talent to lead the fourth industrial revolution era. Measures include the establishment of an innovation academy, which will train 2,500 people through 2023 in areas such as software development.

The academy will be benchmarked to France’s Ecole 42.

The government plans to invest 35 billion won in the academy next year, with 180.6 billion won of investment planned through 2023.