[Sponsored Report] Posco spreads the love, one 50,000 won at a time

[Sponsored Report] Posco spreads the love, one 50,000 won at a time 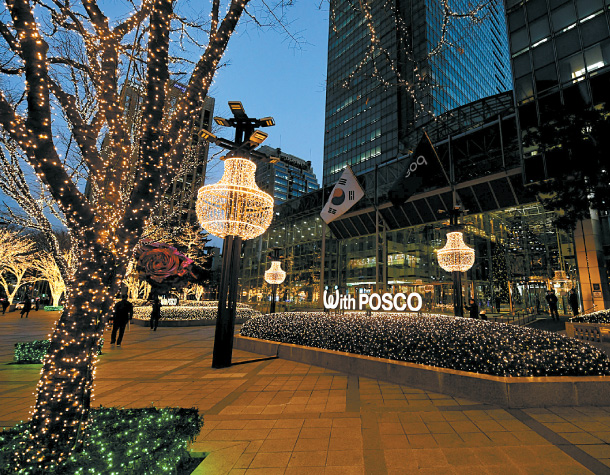 Posco recently distributed “envelopes of love” each containing 50,000 won ($44) to all employees, who can use the envelope to make a donation to a charitable cause of their choosing.

The “envelope of love” campaign was proposed by Posco Chairman Choi Jeong-woo as part of the group’s ongoing efforts to offer help to those who are in difficult situations.

Inside the envelope, there is a message from Choi.

“At the end of the year, I want to have a small sharing event for our neighbors in need,” explains Choi in the letter. “The envelope of love may be used for people waiting for help on a cold winter street and a warm evening meal, or could be donated to the Salvation Army. If you and your colleagues put your hearts together, you could be a great hope for your neighbors in need. If this small sharing is communicated to our neighbors, our society will be even better. Warm and hearty winter stories are expected.”

After the envelopes of love were delivered, employees shared their charitable activities through in-house channels. One employee delivered Christmas cakes to foreigners living in Korea, while another paid for sanitary napkins for low-income young people. One employee donated briquettes after reading an article about people having a cold winter due to rises in briquette prices.

There are about 200 employee volunteer groups within Posco. Most employees agree that this kind of sharing event is meaningful because it can have such a large impact. Employees from Posco, Posco E&C, Posco ICT, Posco Energy and Posco Chemtech are also participating in the campaign.

Posco also donated 10 billion won to help people in need at the end of the year.

Posco is also promoting “Corporate citizenship: develop together” as a new management philosophy. At the end of the year, Posco worked with affiliates to donate money to its neighbors. A total of 10 billion won was donated, including affiliate donations of 2 billion won, of which Posco E&C, Posco Chemtech and Posco Daewoo donated 500 million won, Posco Energy donated 200 million won and Posco Steel, Posco Mtech and Posco Terminal each contributed 100 million won.

Donations are sent to the Community Chest of Korea to support basic livelihoods and educational independence of socially vulnerable people to improve housing and provide health care support.

In addition to financial support, Posco is carrying out social contribution activities in various ways to offer solutions to social problems that future generations are facing.

Posco provides the “Do Dream” and “Posco Rainbow” program for children who need help. The “Do Dream” project provides career development and financial support to ensure the independence of children and young people who live in or out of day care facilities. The “Posco Rainbow” program supports young people who have moved to Korea to adapt to society by providing scholarships.

For young people, the Posco 1% Sharing Foundation built a share house to provide shelter for those who are facing difficulties regarding residence. In addition, Posco is actively supporting 5,500 young people in the next five years to create jobs and start-ups. There are three types of employment support programs: “AI Big Data Academy,” “Corporate Practical Employment Education” and “Incubating School for Business Start-ups.” People who complete the course can find positions at Posco Group or other companies, or start their own business.