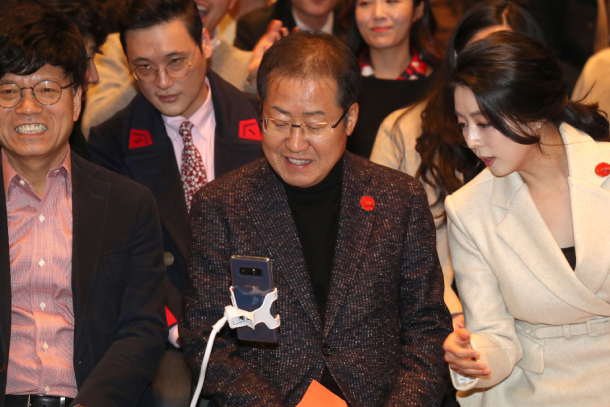 Hong Joon-pyo, former chairman of the main opposition Liberty Korea Party (LKP) and a scathing critic of the Moon Jae-in administration, launched a think tank for conservative opinion leaders on Wednesday in central Seoul and vowed to block the spread of leftism.

In a joint statement launching the so-called Freedom Korea think tank, Hong and some 520 other conservatives accused the Moon administration of “rapidly destroying liberal Korea with the excuse of eradicating jeokpye [deep-rooted vices,]” adding that the current government was concealing a “frightful conspiracy” to establish a leftist federal government on the Korean Peninsula.

The think tank accused Moon’s administration of “vastly denying the 70 years of history that the Republic of Korea has fought for” by implementing left-leaning policies across the country.

It said that Freedom Korea will try to solidify the values of republicanism, democracy and liberalism, while defending the nation from leftist forces trying to destroy Korea’s foundation.

A launch ceremony for Freedom Korea was held at the Korea Press Center in Jung District, central Seoul, where Hong vowed to hold a series of nationwide lectures discussing policy issues and current affairs.

Lee Byung-tae, a business professor at the Korea Advanced Institute of Science and Technology (KAIST) in Daejeon, gave a lecture that was entitled, “Is this the economy?”

Conservative figures from all walks of life have joined Freedom Korea, including Lew Seok-choon, professor of sociology at Yonsei University; Jhe Seong-ho, a professor at Chung-Ang University’s Law School; Han Sang-dae, an attorney who served as prosecutor general during the past right-leaning Lee Myung-bak administration; Koh Young-ju, a former prosecutor and chairman of the Foundation for Broadcast Culture who once called President Moon a “commie;” and Jang Ki-jung, head of the Young’s Liberty Union, who threatened to attack an independent inspector-general who investigated corruption allegations against former President Park Geun-hye by rallying in front of the inspector-general’s residence with a baseball bat.

Hong, who finished second in last year’s presidential election after Moon, has taken every chance to attack the president and his Blue House. Hong’s new YouTube channel, “TV Hongca Cola,” kicked off on Nov. 29 and garnered nearly 130,000 subscribers as of Wednesday as the former South Gyeongsang governor pledged to start a “nation rebuilding movement” by marking an end to the spread of leftism.