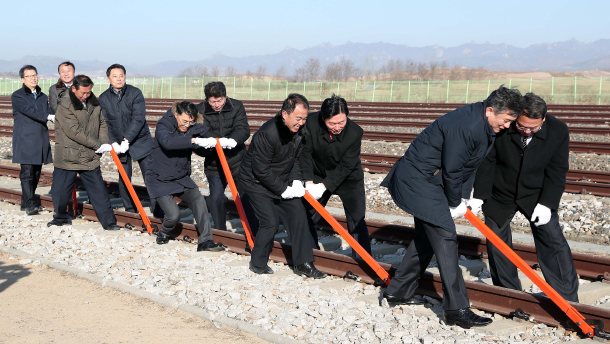 Railway officials from North and South Korea work together to connect the rails between the two Koreas at Panmun Station in Kaesong on Wednesday at a joint ceremony to break ground on a project to reconnect their railways and roads. [JOINT PRESS CORPS]

South and North Korea held a joint ceremony in the border city of Kaesong on Wednesday to break ground on a project to reconnect their railways and roads - inaugurating a new era of exchanges across the heavily fortified border between the two countries.

While its symbolism as a first step to modernize the North’s land transport system and link it to the South’s cannot be overstated, the ceremony itself proceeded modestly, lasting for just around an hour at Kaesong’s Panmun Station, where the two countries’ railways meet.

The South’s delegation of approximately 100 members, headed by Transport Minister Kim Hyun-mee and Unification Minister Cho Myoung-gyon, arrived at Kaesong around 9 a.m. on a special train that departed from Seoul Station earlier that day.

A number of lawmakers supportive of the Moon Jae-in administration’s policies towards the North were in the entourage, as well as a handful of rail and road officials and experts. Other notable participants included the conductor who ran the final few trips in 2008 on the Gyeongui Line - the railway connecting Seoul and the North along the western coast - and five South Koreans with family members in the North, some of whom were in the North’s delegation.

Pyongyang’s delegation was led by Ri Son-gwon, chairman of the North’s Committee for the Peaceful Reunification of the Country, and Bang Kang-su, head of the National Economic Cooperation Federation, and consisted of around 100 members.

After a brief greeting and mingling between delegates from both sides, a North Korean brass band began a concert at 10 a.m. to kick off the ceremony.

That performance was followed by an inaugural address by Kim Yun-hyok, the North’s deputy rail minister.

“This grand sight, where North and South unite their aspirations toward a future of co-prosperity, was not achieved in a day, nor was it given to us,” he said. “We have finally dug the first shovel in our modernization project today … because we are one nation that cannot be split apart.”

In her address, South Korean Transport Minister Kim Hyun-mee stressed the enormous possibilities that lay ahead for the two Koreas in an era of renewed cooperation.

“Inter-Korean exchanges and travel as a result of the rail and road linking will strengthen peace on the Korean Peninsula,” she said. “The enormous amounts we have spent in facing off against one another will be put to further peace and prosperity for all of us.

“We stand on the end of the long tunnel of 70 years of division,” she added.

The two figures then signed a railroad tie - a concrete support piece laid perpendicular to the rails to hold them in place - inscribed with phrases commemorating the event. This was followed by a symbolic linking of the tracks leading to the North and South with a mechanical contraption operated by officials on both sides.

To celebrate the linking of the two countries’ roads, a signboard was unveiled on which the directions to Seoul and Pyongyang were displayed.

The ceremony closed with the North’s brass band playing the song “We are One,” and the divided relatives from the two sides got to talk to each other in front of a fireplace before all participants had lunch together at a restaurant in Kaesong.

The rail modernization project was one of the central agreements reached by South Korean President Moon Jae-in and North Korean leader Kim Jong-un during their historic first summit in the border village of Panmunjom last April.

In their third meeting in Pyongyang last September, the two leaders agreed to hold the groundbreaking ceremony before the end of this year.

Since then, the Koreas devoted much attention into conducting joint inspections of North Korea’s railways, which covered a total of 2,600 kilometers (1,615 miles) along the North’s western and eastern coasts and took 18 days. An inspection of a short section of road along the Gyeongui Line was conducted on Monday, both in preparation for Wednesday’s events.

The wider significance of the ceremony was also reflected in the presence of eight foreign dignitaries, primarily from neighboring countries like China, Russia and Mongolia. Several of them commented on how the inter-Korean connection could further link Korea to the Eurasian landmass through a continental railroad.

The attendance of the executive secretary of the UN Economic and Social Commission for Asia and the Pacific, Armida Salsiah Alisjahbana, was a de facto seal of approval from the international community at large, which was reflected on Tuesday when the UN Security Council granted a sanctions waiver for the ceremony.

For the Koreans who where present, the ceremony struck a sentimental note.

Kim Geum-ok, a 86-year-old native of Kaesong who attended the event as one of the five divided families from the South, said the day brought back memories of her childhood in the border city.

“I can’t put it into words. Those who haven’t experienced it wouldn’t understand the joy that comes in returning to one’s hometown,” Kim told reporters on the train to Kaesong that morning.

“We’re all old,” she added, referring to the thousands separated from their former homes in the North as a result of the 1950-53 Korean War. “Visiting our homes by train is our last great hope.”

For Shin Sang-chul, the South Korean conductor who ran the last trip from the South to Kaesong, the ceremony marked a new beginning, he said, that made him feel “brimming with emotions.”

The first time trains ran regularly across the border since the war was in December 2007, when freight cars carried construction materials and resources from the South to the Kaesong Industrial Complex via Panmun Station.

Those exchanges came to a halt a year later in 2008, when North Korea abruptly banned land-based transport to and from the South after a South Korean tourist was shot by a North Korean soldier while on holiday in the Mount Kumkang resort.

The optimistic tone of Wednesday’s ceremony, however, did little to dismiss the fact that actual construction on the project, as well as any other inter-Korean economic initiatives, remains effectively blocked by international sanctions in place against the North due to its past nuclear and ballistic missile tests.

With talks between Washington and Pyongyang at a stalemate, inter-Korean goodwill for the moment appears mostly symbolic, as reflected by the reticence of both the North and South’s officials when asked about future plans by reporters at the ceremony.

The prospect of a second meeting between Kim Jong-un and U.S. President Donald Trump, repeatedly mentioned in the latter’s tweets, could possibly bring a breakthrough that could transform Wednesday’s ceremony from mere symbolism to more tangible cooperation.