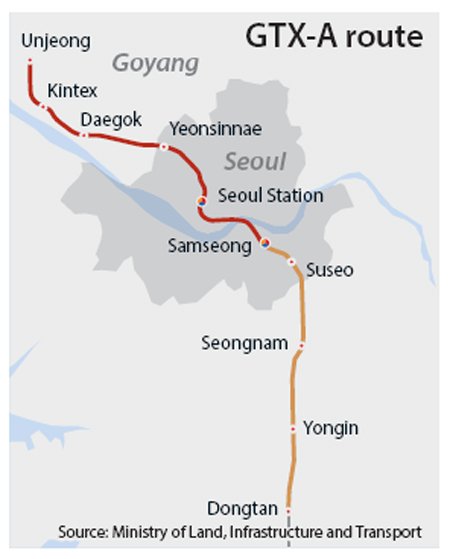 The government broke ground on the construction of a high-speed rail line connecting Gyeonggi and Seoul, a transportation link crucial to the recently announced new towns.

According to the Ministry of Land, Infrastructure and Transport, the construction of the GTX-A has started. It begins at Unjeong, northwest Gyeonggi, passes through Seoul Station and Samseong-dong in Gangnam, southern Seoul, and extends to Dongtan, southern Gyeonggi.

The GTX-A is expected to shorten the commuting time of those living on the outer edges of Seoul.

“For workers living in the greater Seoul area, it takes more than 90 minutes to commute. One out of every 10 Gyeonggi residents has considered moving [back to Seoul] because of the time it takes to come and go to work,” said the Land Minister Kim Hyun-mee. “I hope that the GTX will help people have a more leisurely evening and a better commute.”

The GTX is the first high-speed rail serving the greater Seoul area. It will reach a maximum speed of 180 kilometers per hour (112 miles per hour). The government has three GTX lines planned connecting the four new towns recently announced.

When introducing the new towns earlier this month, the government said the goal was to enable people living in these areas to reach work within 30 minutes.

It currently takes 80 minutes to travel from Kintex to Samseong-dong, Seoul. With the GTX, only about 20 minutes will be required. By express bus, it takes 60 minutes from Samseong-dong to Dongtan, but with the high-speed rail, it will take 22 minutes.