Bench coats are so last season - short is in now

Bench coats are so last season - short is in now 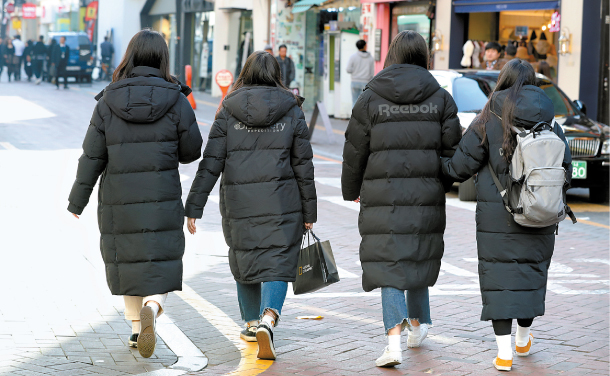 Sales of bench coats, known as long padding in Korea, have been suffering this year due to the unseasonably warm winter.

November and December are when sales of winter coats are usually at their peak - November alone saw sales tumble 20 percent this year.

“In November, because of the warm weather, we had trouble selling the bench coats. In December we have seen a slight recovery,” said Lee Jong-hoon, an executive at Discovery. “Last year, we made records by selling all of our products, but we only expect to sell roughly 65 percent by the end of the year.” 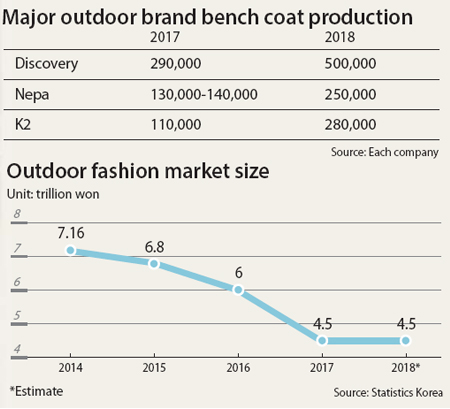 “Compared to last year, we have increased the number of down jackets by 30 percent,” Lee from Discovery said. “It seems some consumers lost interest due to the oversupply.”

Some of the brands betted on shorter bench coats, dubbed short padding.

“I’ve heard several of the brands that betted high [on the popularity] of short padding are struggling,” Lee said.

Chung Mi-jin, a 44-year-old housewife who lives in the affluent Seocho-dong in Gangnam District, southern Seoul, said there aren’t many parents who are wondering what kind of winter coat they want to buy for their children.

“Some children who are sensitive to changing fads have already switched from long padding to short padding or shearling jackets,” Chung said.

The uncertainty of the economic outlook is also said to be a major contributor to falling bench coat sales.

“Around this time last year there were expectations that personal financial situations would improve if income-led growth goes well,” said Lee Eun-hee, a professor of consumer science at Inha University. “Additionally, the PyeongChang Winter Olympics, which was the first Olympic event held in Korea in 30 years, also helped boost consumer sentiments.

“On top of such hype, an explosion of consumption was made with the introduction of the hit ‘PyeongChang long padding,” Lee added. “This year, consumer sentiment has frozen due to society’s [uncertainty] over issues including shrinking jobs and the cryptocurrency market collapsing.”

Another factor affecting the falling demand for bench coats is the increase in low-priced bench coats.

“Although sales of expensive bench coats with price tags around 400,000 won [$356] are expected to reach around 60 percent by the end of this year, sales of long padding in the 100,000 won range are expected to be much higher,” said an official at Mille.

The competition has already started with WeMakePrice and Adidas selling bench coats for roughly 90,000 won online.

Down jacket sales have been used as an indicator of consumer sentiments during the winter season since the 2000s.

This is because every outdoor and sports brand sells down jackets during the winter season, and all sales of such jackets are concentrated during the short two to three-month period.

According to an estimate by Samsung Fashion Institute, down jackets account for 40 percent, or 1.9 trillion won, of the outdoor fashion market, valued at 4.5 trillion won.

The fashion industry is wondering whether the hype for bench coats is over.

“Around this time last year we were wondering how many bench coats we needed to produce for 2019, but today we have to think about whether we want to continue putting bench coats as our main item next year,” said Nepa CEO Lee Sun-hyo.

“Bench coats have their limits since they are expensive and not a necessity,” said Suh Yong-gu, a professor of marketing at Sookmyung Women’s University. “Last year, companies targeted consumers who are teenagers and those in their 20s and this year those in their 30s and 40s,” Suh said. “But this year, due to the sluggish economy, these consumers’ shopping desires isn’t the same as in the past.”