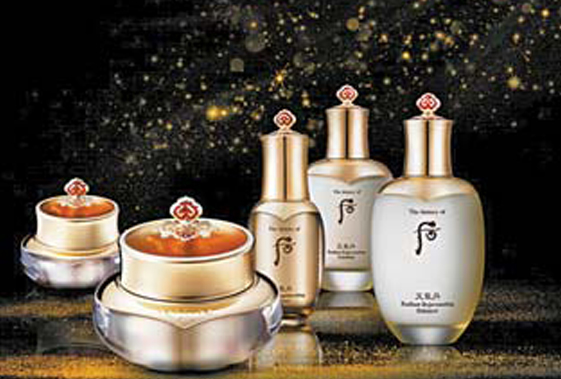 This is the first time a Korean beauty brand has reached that threshold. The 2018 record is also a 40.8 percent increase from last year’s annual sales.

“For us, the achievement is meaningful in that it’s a sign we’re nearly able to compete shoulder-to-shoulder with global beauty brands,” LG said in a statement.

The 2 trillion won in sales figure is based on manufacturer price. Counting the consumer price tag, the figure jumps up to 3 trillion won. According to market research firm Euromonitor International, the top three global beauty brands - Lancome, Shiseido and Estee Lauder - generate between 4.4 trillion and 5.3 trillion won a year based on the same standard. 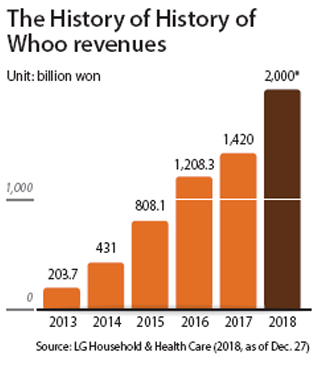 The last time The History of Whoo set a record was in 2016, when the brand made 1 trillion won in annual sales, 14 years after its launch. Breaking the 2 trillion won threshold came just two years later.

The rapid growth is notable in that Whoo successfully survived a widespread boycott of local brands in China last year, following the installment of the U.S.-led antimissile system Thaad. This is in contrast to a score of other beauty companies like local leader Amorepacific, which have suffered huge blows from the loss of Chinese customers and some have yet to recover to pre-Thaad revenue levels.

A spokesman explained that the brand kept its positive image thanks to word-of-mouth marketing and repurchases from Chinese customers.

In terms of strategy, LG believes Whoo’s positioning as a high-end beauty brand has proven effective. Among its wide brand portfolio, The History of Whoo is one of LG’s premium brands with a higher price tag.

Its main concept is that the products are based on records from Korea’s past dynasties which use oriental medicine as main ingredients. The brand story is also reflected in its product packaging, which emphasizes gold and red, which industry watchers say fits well with Chinese consumers’ taste for glamor.

“We also concentrated a lot of our marketing activities to target VIP customers that have buying power,” said an LG spokesman.

For next year, the company plans to continue its drive to push premium brands. Another brand LG is hoping to develop in the price range is SU:M, which is less flashier than Whoo, but emphasizes the use of fermented plants. Although smaller than Whoo, SU:M is also expected to reach 440 billion won in sales this year, a 15.8 percent increase year-on-year. During this year’s third quarter, LG’s three luxury brands - Whoo, SU:M and O HUI - were responsible for more than 60 percent of its beauty revenue.