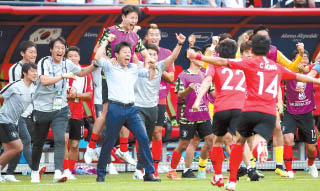 The Korean football team and former head coach Shin Tae-yong, fourth from left, celebrate after scoring a goal against Germany during the FIFA World Cup. [YONHAP]

Shin was appointed as the Korean national football team’s interim coach right before the World Cup, but just six months after the quadrennial event, he’s now a football commentator. Shin will no longer be shouting at the players from the side of the pitch, although he may still raise his voice from time to time as he commentates on the Asian Football Confederation Asian Cup in the United Arab Emirates in January for JTBC.

At the World Cup, Korea failed to achieve its goal of advancing to the round of 16, but it still made headlines for spectacularly defeating defending champion Germany.

Korea’s victory was such big news that it was one of the eight biggest surprises of 2018, according to the Associated Press.

“It was a victory achieved by our players,” Shin said. “They worked really hard. Although they got eliminated in the group stage, Joachim Low [head coach of German team] walked up to me first and congratulated me. He told me that Korea is a very strong team. He seemed very gentle and nice.”

But the other two World Cup group matches were a different story. Korea started with a loss against Sweden, the one game they really had to win.

“Thinking too much about Sweden’s height and power was the cause of our loss,” Shin said. “Before the match, I said assigning Kim Shin-wook was a trick for us to use their strength as our strategy, but it didn’t pay off.”

In Korea’s second match, against Mexico, the team lost 1-2.

“Right before the World Cup, five of our starting players left the team due to injuries,” Shin said. “I thought that was the end of my luck and other than my luck, I wasn’t good enough as a head coach.”

When Shin returned after failing to lead the team to the round of 16, he didn’t leave his house for two days as he lost all his confidence.

“I accepted the criticism and stayed at home for a few days,” Shin said. “On the fourth day, my son told me that he wanted to eat a hamburger so we went to the shopping mall. A lot of people told me that they enjoyed watching the match against Germany. Then, a few days after, I went to a restaurant and got about 50 requests for my autograph.”

The encouragement and attention Shin received after the World Cup helped him gain the confidence to get up and out of the house.

“I may have failed, but I found out that there were fans that liked me,” Shin said. “Criticism is only made if they are interested. Ignorance is scary. I accepted all the harsh criticisms.”

Shortly after Shin started to accept the criticism, the Korea Football Association (KFA) announced that they will not re-sign him. Since the decision was made right after the World Cup, his brief success at the World Cup was forgotten, and he is better remembered as a coach with a disappointing career.

Instead of Shin, the KFA appointed Paulo Bento as the new head coach. Once Bento was appointed as head coach, he highly complimented Shin.

“I don’t think Korea was hopeless at the World Cup,” Bento said. “They barely lost the first two matches and finished their last match with a win. I wouldn’t say it was a failure.”

After spending six months without a job, Shin will once again return to Korean football. Rather than the bench, Shin will be watching the players from the broadcasting booth as a commentator for JTBC.

“I first declined the offer,” Shin said. “It’s not right for a former head coach to comment on his successor.”

However, JTBC didn’t give up. They’ve continuously asked Shin to commentate at the Asian Cup as he knows the players better than any other coach or player. Before his time as head coach, Shin served as the coach of the national team at the 2015 Asian Cup.

“When I wasn’t coaching in 2013, I commentated and I could see the trend,” Shin said. “I’ll share my stories from when I was the head coach and criticize the players without discouraging them.”

Korea is currently assigned in Group C along with China, the Philippines and Kyrgyzstan.

“At this Asian Cup, I attended the draw ceremony [as head coach],” Shin said. “Since the Philippines has a lot of biracial players, they play powerful football, so we need to play faster. China has come a long way but they’re not good enough yet. But since they have [Marcello] Lippi as head coach, we can’t be careless.”

While the players have already arrived in the UAE and started training, Son Heung-min of Tottenham Hotspur won’t join the team until Jan. 16, when Korea plays its final group match against China. The fans are concerned about the squad’s teamwork, but Shin said he is not worried at all.

“At the Rio Olympics, where I was the head coach, Son Heung-min joined right before the event,” Shin said. “Since [Son] had been working with them consistently, there shouldn’t be a problem. But he’ll have to condition himself very well to compete as he’s playing six matches right before the Asian Cup and he’s moving from playing in cold weather to warm weather. He’s the biggest star, but he’s always the first one to act. He’s the kind of player that the coaches can’t hate.”

As for favorites to win in the upcoming Asian Cup, Shin chose Korea, Japan, Iran and Australia. Although the other three countries have strong players, Shin says Korea has an especially good team this year.