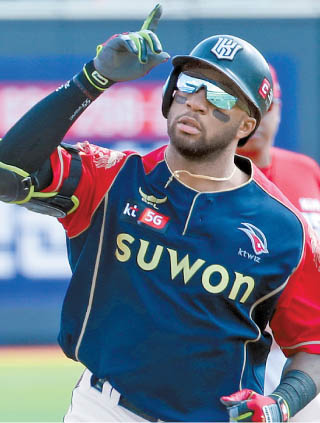 Rojas played all 144 games for the Wiz this past season, batting .305 with 43 home runs and 114 RBIs. He was one of five players in the 2018 season to hit 40 home runs or more. He finished tied for second, along with Jamie Romak of the SK Wyverns and Park Byung-ho of the Heroes in the home run race and was paid $1 million.

With Rojas, the Wiz completed their foreign player roster for the 2019 season. The Wiz, who finished ninth in the 10-team league in the 2018 season, had already signed pitchers Raul Alcantara and William Cuevas.

Rojas is the last foreign player to sign a contract for the 2019 season. KBO clubs are each permitted a maximum of two foreign pitchers and one foreign position player.

Rojas signed the third-most lucrative contract for a foreign player in the 2019 season. Doosan Bears pitcher Josh Lindblom can make up to $1.92 million next year, followed by Samsung Lions slugger Darin Ruf, who recently inked a deal worth $1.7 million.

In this year’s foreign player signings, the Bears were the biggest spenders, at $3.85 million. This is quite a surprise as the Bears are normally loath to splash out on new players, from overseas or domestically.

While the Bears retained their two foreign pitchers, the club also brought in a new fielder, Jose Miguel Fernandez at $700,000. The Bears were extra careful when filling their last position player spot as they struggled to find a player to fill the slot in 2018, spending most of the season with one foreign player less than the rest of the league.

The Heroes spent the least this year at $1.9 million. The Heroes re-signed two players - pitcher Jake Brigham at $900,000 and outfielder Jerry Sands at $500,000 - and newly signed pitcher Eric Jokisch at $500,000. The Heroes are the only club in the KBO to spend less than $2 million on foreign players this year.

Considering the total spending, the NC Dinos were by far the biggest spenders this year. The Dinos brought in three new foreign players and spent the maximum $1 million on all three. Domestically, the Dinos started their investment by re-signing a three-year contract with free agent Mo Chang-min. Then, the Dinos signed a four-year contract with free agent catcher Yang Eui-ji at 12.5 billion won ($11.2 million). In addition to player signings, the Dinos will be a completely new team as they will move to a new stadium in Changwon under the direction of new manager Lee Dong-woo.

The Kia Tigers was the only other team to sign all new names in their roster for foreign players. The Tigers originally planned on re-signing pitcher Hector Noesi but weren’t able to due to high taxes. As a result, the Tigers newly signed pitchers Joe Wieland and Jacob Turner and fielder Jeremy Hazelbaker.

Starting in the 2019 season, the KBO has introduced a new rule that caps foreign player salaries at $1 million, including signing bonus and incentives. This regulation doesn’t apply to existing players.