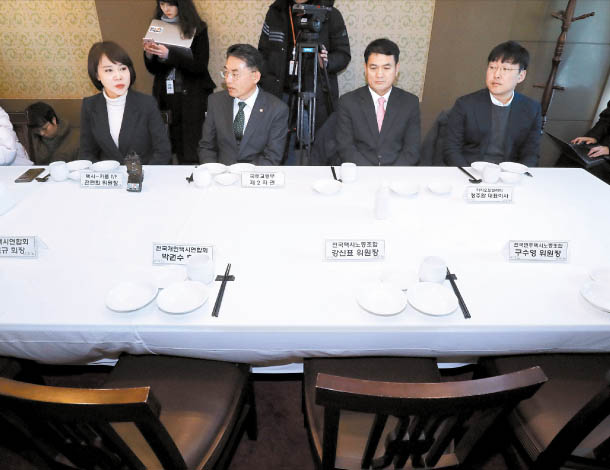 Held at a restaurant in Yeouido, western Seoul, the gathering was supposed to launch a joint discussion body where representatives from Kakao Mobility and the taxi associations could work out their differences and find a “social consensus” regarding the carpool service.

The expected attendees for the talks were Democratic Party lawmaker Jeon Hyun-heui - who organized the talks and leads the ruling party’s carpool task force - two officials from the Transport Ministry, Kakao Mobility CEO Jung Joo-hwan and the heads of four taxi associations.

The gathered government and ruling party officials and the Kakao Mobility CEO were forced to sit and wait when nobody turned up to represent the taxi drivers. After 30 minutes, a director from one of the associations did arrive, but only so that he could officially let everybody know that they would not be coming.

“We were considering participating on the condition that Kakao halts its carpool service, but since that didn’t happen, we will not take part,” he said. Kakao has been running a beta carpool service since Dec. 8, allowing a limited pool of randomly selected users access.

The taxi associations’ decision to boycott the meeting only served to isolate them further from the other participants, particularly because the group had earlier agreed to attend the meeting. According to a press release from Jeon on Dec. 19, all four had said they would cooperate in launching negotiations.

“I wish to see more effort for a proper conversation on the taxi industry’s development instead of a stiff attitude asking when carpool services will be shut down,” said Kim Jeong-ryeol, the second vice minister for land, infrastructure and transport, who attended the meeting. “We will make efforts to rearrange a meeting early next year.”

Kakao Mobility CEO Jung made it clear that the company would continue to attempt to talk to the taxi industry. Kakao initially planned to launch its carpool service on Dec. 17, but postponed it after a taxi driver burned himself to death in protest.

Despite agreements made earlier this month, the four associations released a joint statement on Wednesday saying that there would be no discussion at all if Kakao does not shut down its beta carpool service. The four association heads who did not attend the meeting repeated this stance to local reporters later that day in front of the National Assembly.

“We expressed our intention to take part in the conversation only if Kakao stops its carpool service, but the ruling party seems to be wanting to discuss policy with the premise that Kakao’s service is realized,” said Park Bok-gyu, head of the Korea National Joint Conference of Taxi Association.

The government has been making efforts to bring taxi associations and Kakao Mobility together since last year, but no official meeting has been successful as the taxi industry refuses to negotiate on carpool services in any form. The ruling party’s carpool task force was established earlier in October to speak to both stakeholders and mediate between them, but it has so far failed to bring about any concrete results.

Meanwhile, the taxi industry is preparing for another protest after a massive rally of nearly 120,000 drivers was held in front of the National Assembly on Dec. 21. The associations will decide on a fourth protest in a meeting to be held on Dec. 31, which they say will be even larger and possibly more violent than previous ones.