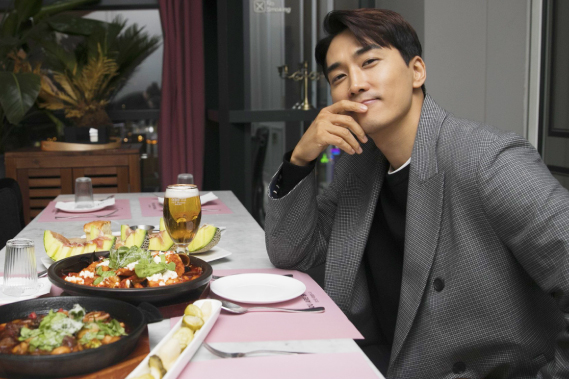 Song Seung-heon, who has been in the entertainment industry for more than two decades, says he only sincerely became interested in acting recently. [ILGAN SPORTS]

It has already been more than two decades since Song Seung-heon has made his debut in the entertainment industry in 1995 as a model. Long recognized for his good looks, the 42-year-old model-turned-actor has since then took on many roles. They mostly fall under the category of being a handsome heartthrob, such as in “He was Cool” (2004), or attentive husband, like in “Wonderful Nightmare” (2015).

But starting a few years ago, the actor began to challenge himself by turning his focus to genre movies and dramas. He expanded his spectrum of roles to a con man and even an unintended pervert.

“I realized how interesting genre titles are,” said Song. “I really like how I can show diverse aspects [of myself] in genre features without having to get involved in romance.”

Though he has been acting for many years, Song confessed that it has only been several years since he earnestly fell for acting.

“Though some may say that I have been lucky, it hasn’t been long since I started to feel interested in acting. In the past, I behaved in the way I was told. But I changed my attitude after receiving a letter from a fan.”

To discuss this new phase of his acting career, Song sat down for an interview with Ilgan Sports, an affiliate of the Korea JoongAng Daily. Below are edited excerpts.

Q. You recently finished the OCN series “Player,” in which you play a con artist. This is the second consecutive time you have chosen an OCN drama, after fantasy thriller series “Black” (2017). What was the reason for this decision?

A. I realized the charm of genres title while working on “Black.” It was my first time, but was very fun. I was entertained by how a story is able to show conflict among characters even without the involvement of romance. Before, I was more interested in stories with powerful narratives that included romance. I also liked the idea of working again with the same staff. Working with familiar people is not necessarily always good, but it is something I consider positive.

You haven’t taken a proper break over the past several years and have jumped into a new project almost right after the last. Aren’t you tired, both mentally and physically?

One senior actor told me that the only thing that is left [in the end] is the work. Commercial success and acting skills are both important, but I think working on many different roles while you’re young is important. So I try not to spend too much time worrying [about whether to work on a new project or not]. In terms of physical tiredness, I usually don’t feel exhausted, but sweat a lot while working on “Black” both because of the hot weather and because there were many scenes in which I had to run.

It has already been 23 years since you debuted. Do you feel that much time has passed?

I don’t feel it at all. It feels like everything just happened a few days ago. Back then, I couldn’t imagine what I would be like 20 years later. But looking back, everything feels so clear.

How do you imagine yourself to be in the next 20 years?

I want to age well. I don’t necessarily mean my physical appearance, but I want to melt into a story without any awkwardness. It isn’t easy to receive a compliment in Korea, and that makes me want to hear more of it. The most rewarding compliment I have heard so far is “I saw a new aspect of Song Seung-heon.” Whenever I hear similar comments, I feel that there has been a wall between myself and the public. If there is something that I want to hear from viewers, it would be hearing that I have changed from that fixed image.

When you jumped into the acting scene, you received lots of criticism for your acting. Was there a time when you just wanted to call it quits?

In my 20s, there was never a time when I felt acting was fun. When I was offered a role, I just worked on it without much enthusiasm. I didn’t even refuse. I didn’t put in much effort, and of course, I didn’t receive a good response.

That’s how I spent my 20s, but I wasn’t brave enough to leave the industry because of the support I received. But my attitude changed in my mid-30s after receiving a fan letter. The letter wrote that “I feel happy and moved when seeing your acting. You should feel grateful to have the job of actor.” I felt so moved yet embarrassed after reading it. Since then, I started to feel more responsibility, and acting became more fun for me. It would have been better if I had felt this earlier, but I’m grateful that it didn’t take me longer.

One of the biggest questions fans are curious about is your marital status. Do you plan to get married?

It’s not like “I don’t want to get married.” I’ve always wanted to get married. I feel envious when seeing friends playing with their children. But first off, I’m not sure whether I’m qualified to get married right now, and secondly, I don’t feel confident about it. I want to get married before I even get more comfortable living alone (laughs). Another thing is that I don’t feel that lonely. When I spend time alone at home, I feel neither bored nor lonely. I’ve grown used to it. But I still believe in fate and that there is a right person for me.

My biggest plan is to meet the public through dramas or films. Through which role and what responses I can generate are my greatest homework, and I’ll have to figure that out.