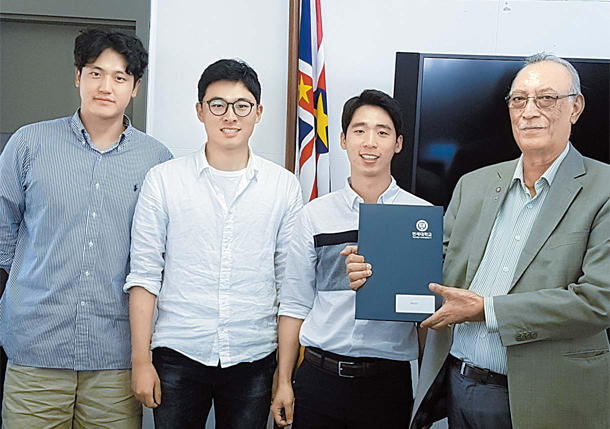 Niue is an island country located in the South Pacific. At just 260 square kilometers (61.8 square miles), Niue is one of the smallest countries in the world.

Less than half the size of Seoul, Niue is a free union country that depends on New Zealand for its diplomacy and national defense.

Just like Korea, the island country is suffering from a shrinking population. As the younger generation leaves home and heads to New Zealand for jobs, Niue’s population has dropped from 5,200 people to 1,600. Three college students from Seoul traveled to Niue with an idea to save the country from the population crisis that threatens its existence.

The three college students said that most people laughed when they heard their plans. However, after staying in Niue for four weeks last summer, they were able to meet Sir Toke Tufukia Talagi, who has served of premier of Niue since 2008. They returned to Korea after finalizing a consulting agreement to revitalize the island through developing a robust tourism industry. In the end, their plan wasn’t a trainwreck, but a well-orchestrated success.

As the economy struggles, more and more college students are having trouble finding company jobs and are instead seeking jobs as civil servants, which ensure greater job security. In order to make this goal, students spend countless days and nights studying to pass the civil service exam. However, unlike most people their age, Yonsei University students Cho Yeong-hun — who majors in public administration — and Song Jae-min and Baek Jong-min — business administration students — have come together to work on a shared dream.

Instead of spending their summer vacations doing internships at start-ups or at a consulting firms, these three decided to venture to do something that is simultaneously enjoyable and positively impacts society. With the money they accumulated from doing part-time jobs and financial support from their school, the three boarded a plane to Niue. Choosing to go abroad wasn’t easy. Since there was no guarantee that the Korean government would listen to what three college students would have to say, even if they did introduce a useful social policy, the three ultimately decided to try their luck overseas.

After searching for countries that suffered from serious social problems and had the willingness to change but lacked the ability to execute, they finally decided on Niue. It turns out that the population loss in Niue was a common problem in other South Pacific countries as well. 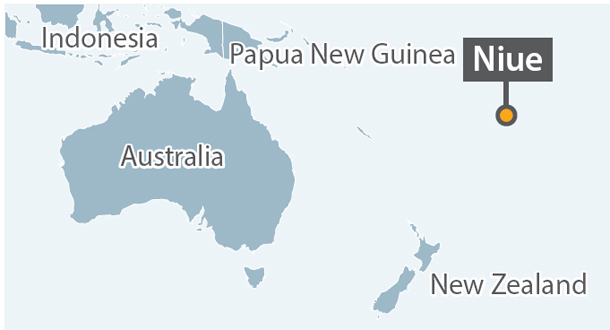 The college students got together for three weeks before summer vacation to study the political, financial and cultural aspects of Niue. They even went so far as to ask for an interview with Fiji’s Ambassador to Korea, who is in charge of Niue’s diplomatic relations. Finally, after studying everything they could about the island, they left on their 25-hour journey to Niue in August.

From the second they landed, the students hit the ground running with no clear plan but one concrete goal. It was unlikely that a country, no matter how small it was, would accept a policy proposal from a couple of foreign college students, but that didn’t stop them from trying. The three constantly emailed, called and talked to Niue’s governmental agencies themselves, pouring their policy suggestions out to anyone who would listen.

“At first everyone started to think little of us, but after they saw the presentation that we had prepared, that’s when they started to take us seriously,” said Cho. Through persistence alone, these three college students were able to meet with about 20 Niue government officials, some of high-ranking.

The policy that the students prepared was, in fact, very simple. It aimed to alleviate depopulation through sustainable developments in tourism, such as accommodation infrastructure. Even though it sounded obvious, the execution of the policy was a completely different matter. For their accommodation infrastructure, they began visiting neighborhoods and knocking on doors to recruit anyone who was interested in their “Niue Stay” program.

Niue Stay is a social entrepreneurship program in which village residents can enter the tourism business by offering empty rooms to travelers as well as providing cultural interactions to visitors. Sooner or later, the small island was bustling with news of these three young Korean students. The local press picked up on their story. When they finally got to meet with the country’s premier, he welcomed them by saying, “I have heard a lot about [you three.]”

Finally, two days before leaving Niue, the students received an oral promise from the premier about signing a memorandum of understanding (MOU). Even though they are now in Korea, these three will be monitoring their policy plan through a website that is connected to the Niue government’s official website.

In the end, their adventure concluded with a fairy-tale happy ending. However, what people are more curious about is not how it ended, but how this whole dream began. The three college students come from different regions, graduated from different high schools and all started their undergraduate education in different years.

“[We] all worried about what [we] could do to bring happiness. Of course, earning a lot of money does help, but ultimately [we] decided that happiness could be achieved by helping others and spreading positive social change,” said Cho.

According to Cho, his friends, who are also majoring in public administration, spend countless hours preparing for the civil service examination. Cho, unlike his other friends, always dreamt about working in an international organization like the UN. This is why he ultimately decided to embark on a different route.

This was also the case for project member Song Jae-min. Song does not have any of the qualifications deemed necessary to find a job: he doesn’t even have a certified English score.

“I don’t want to take the path that everyone else takes, and would rather find something that I enjoy doing,” was the reason Song gave as to why he didn’t have any certified qualifications.

“I do understand that being employed is important, but I also want to be like Bill Gates, an entrepreneur who positively influences society,” said Song. “Ever since I set this goal for myself in the seventh grade, [I studied hard]. When I was in high school, I didn’t stop studying hard, but my reason for doing so did not include wanting to get into a prestigious college. I have come this far with this attitude.”

However, all three students credit their elite alma mater — Yonsei University — for supporting their attempts to do something different.

“In the past, people who had dreams like such were not able to act upon them because they didn’t have the means or people to share the dream with. They would have ultimately given up on their dreams and followed the path that most people take,” said Jang Yong-seok, the deputy head of the Institute for Higher Education Innovation at Yonsei University (iHEI). “Universities nowadays focus on distancing themselves from old-fashioned education methods and instead work to connect students who have similar interests and guide them to their goal.”

The iHEI is now funding over 50 team work stations that attempt to solve social problems by coming up with policy recommendations. The ideas that the teams they support come up with are fresh, innovative and new. “The Rhythm of Hope,” one of the many work stations, created a micro-funding site that creates videos that encourage viewers to donate to needy causes. The White Bulls, a start-up social enterprise, invented an ultralight heating tent and provides it to the elderly who live in cheap lodging houses.

Sachum is another start-up social enterprise founded by Cheon Geon-hyeok, a Yonsei University student who majors in bio-technology. The word sachum is a Korean word that means “to fill in the breaks in walls.”

Like its name suggests, the enterprise focuses on providing services to those with physical and mental disabilities. One of the services they provide is a mobile app and AI speaker that helps the blind pick out clothing when shopping online. This service is also expected to be quite useful for the public at large. However, regardless of the business potential it would have if marketed towards the public, Sachum focuses on providing services for the disabled.

“My dream is to create scientific technologies that will help make the world a better place. I would like to be remembered as someone who worked for social development [rather than personal gain],” said Cheon.

“People who come to university without a clear goal or idea about what to do with their life usually end up feeling lost. You need a lighthouse that will help guide you to your goal, and not to the normal option that most people opt to take,” Cheon added. “In addition, [if you do decide to go on a different path], then you need courage and encouragement from others, like I thankfully received.”

Even though their specific points of interest might be different, the goals that these innovative Yonsei students share are remarkably similar — working harder than anyone else, appreciating the value of competition and using that value to spread positive social change.

Healthy competition, according to these students, is defined as the endeavors that people go through on the path that best suits their abilities and interests. In this view, giving your all is never a problem, but trying to find a shortcut will likely lead to failure. In the end, these students have come to the agreement that if everyone studies their hardest and engages in healthy competition, then society is bound to move in a better direction.

This approach to life is quite different from the one seen in popular jTBC drama “SKY Castle.” In the drama, high school characters are pitted against each other by their parents in the race to get admitted to prestigious universities.

The parents of these high school students almost always remind their children that “friends are your enemies, school is like a warzone and a healthy competition is a phrase that only winners can use.” The parents of these students rationalize this harsh advice by convincing themselves there is no other way. Many viewers say that this drama accurately portrays Korea’s educational system. However, the social ventures of the students who went to Niue and others proves this isn’t always the case.

“When you figure out the meaning of your life, no matter what age you are at that time, you will change,” said Kim Yong-hak, the president of Yonsei University. “However, our current education curriculum does not push students to [figure this out]. In the past, you could live a normal life without knowing who you are. However, nowadays we have to know who we are and what we can do. Competing against each other to gain more meaningless specifications is like running in place: it doesn’t help progress. Now is the time to change our direction and run [towards our own goals].”