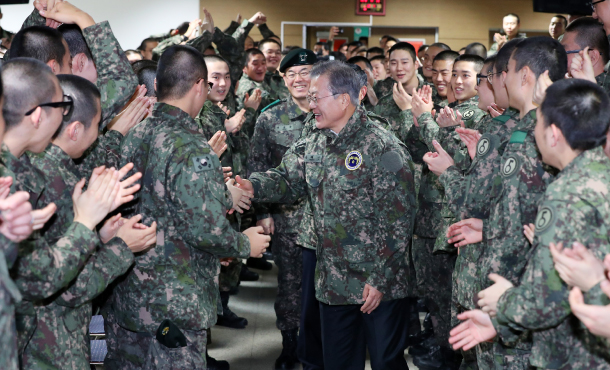 Stephen Biegun, the U.S. special representative for North Korea, conveyed multiple times to Seoul that the issue of cost-sharing for the stationing of U.S. Forces in Korea is linked to the Pyongyang nuclear issue during his visit here last week, according to multiple diplomatic sources Friday.

Biegun made a four-day visit to Seoul from Dec. 19 to 22, where he held a working group meeting on North Korea’s denuclearization that he co-chaired with his South Korean counterpart Lee Do-hoon, the special representative for Korean Peninsula peace and security affairs.

Multiple diplomatic sources said that while defense cost-sharing is not in Biegun’s portfolio, he is “very familiar with details of the negotiations.”

One source said, “If the defense cost-sharing issue is not resolved in a manner intended by U.S. President Donald Trump, there is a concern that he will approach it not only as an economic issue but that he would link it to the North Korea nuclear issue.”

Washington seems to be saying that Seoul will have to accept the Trump administration’s demands for a sharp increase in contributions in a new defense cost-sharing agreement currently under negotiation if it wants its own position on North-U.S. talks and denuclearization to be accepted.

“America shouldn’t be doing the fighting for every nation on earth, not being reimbursed in many cases at all,” Trump said in a speech to troops in Iraq on Wednesday. “If they want us to do the fighting, they also have to pay a price.”

He continued, “And sometimes that’s also a monetary price, so we’re not the suckers of the world.”

Trump, in keeping with his tough stance on defense burden-sharing with allies, tweeted on Dec. 24: “We don’t want to be subsidizing rich countries at the disadvantage to us.”

Since March, Seoul and Washington have been negotiating a renewal of their bilateral Special Measures Agreement (SMA), a multiyear cost-sharing deal under the Status of Forces Agreement for the maintaining of U.S. troops in Korea, which is set to expire at the end of this year. Washington is demanding Seoul pay significantly more, around 150 percent the current amount, according to U.S. media reports.
The latest round of talks took place in Seoul from Dec. 11 to 13, but the two sides failed to strike a new deal.

Amid a deadlock in the latest round of negotiations for a new bilateral cost-sharing agreement, the 10th round since 1991, Washington was said to have proposed during the most recent meeting to set the expiration date of the new deal to one year, shortened from the current five years.

This could be a tactic by the Trump administration to gain more time as it conducts a comprehensive review of defense burden-sharing deals to increase the contributions of allies including Japan and NATO.

Under the current deal, Seoul pays annually around 960 billion won ($860 million), or around half the cost of the stationing of some 28,500 U.S. troops in Korea.

Seoul is said to have conveyed that it cannot accept a steep increase in its contributions nor a one-year deal.

A government official said, “The government position is that it is difficult to increase the contribution to above 1 trillion from 960 billion won this year.”

During his Seoul visit, Biegun conveyed the message that a “roadmap” for North Korea denuclearization has been completed that deals with the easing of sanctions on Pyongyang.

Negotiations for a new defense cost-sharing deal could be an issue that tests the bilateral alliance.

“The issue of defense cost-sharing is becoming a time bomb for the South Korea-U.S. alliance,” said Chun Yung-woo, a former Blue House senior secretary for foreign affairs and national security. “Depending on what sort of attitude South Korea shows in future negotiations, there is a chance that the United States may change its attitude toward the alliance.”

“What is the pretext for the increase?” Song asked during a press conference Friday. “As a principle, the United States should pay for the stationing of the U.S. Forces Korea, but Korea as an exception has been paying a part of the portion, and has also constructed the best U.S. base in the world.”

He referred to the Pyeongtaek base in Gyeonggi, which became the new headquarters for the USFK in June after a move from Yongsan District in central Seoul. Seoul covered around 90 percent of the cost of constructing the new base, or some $10.8 billion.

A new cost-sharing agreement would have to be approved by the National Assembly.