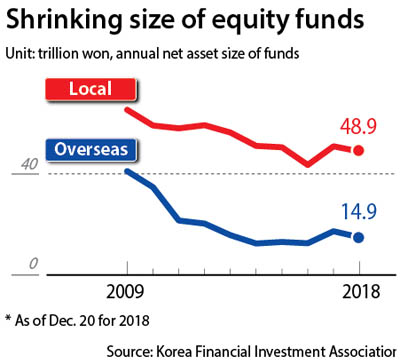 Early this year, 47-year-old office worker Lee Ji-eun finally sold a stake in a Chinese equity fund that she bought back in March 2012.

Although Lee only saw a profit of 240,000 won ($214.74) from the 20 million won she invested six years ago, the government still took income tax every year the fund turned a profit.

“I should have put it in a regular savings account so that I could take my mind off it,” sighed Lee.

Equity funds have been shrinking as local investors struggle to cope with a complex and daunting tax system.

According to the Korea Financial Investment Association (Kofia), the net asset size of local equity funds stood at 48.9 trillion won as of Dec. 20, a 25 percent drop from the 65 trillion won figure back in 2009. Overseas equity funds have reduced to one-third of their size over the same period, falling to 14.9 trillion won.

The association estimates that around 84 trillion won of capital is no longer being invested.

Experts argue that the unfair tax system placed on equity funds needs to be corrected to stimulate the market.

“Tax rates are all different in the local equity fund market by financial product,” said Hwang Sei-woon, a researcher at the Korea Capital Market Institute. “The tax problem hasn’t been solved for nearly 20 years … investors are turning away as they also face a low rate of return.”

Experts point out that the main problem with the tax system is that standards differ by investment product.

Income from funds is divided into three categories: interest, dividend and profit from sales.

While investors aren’t levied with the tax on profits from a sale in local equity funds that invest in publicly-traded stocks, overseas equity funds are hit with the tax as well as an additional tax on foreign-exchange profit.

It is advantageous for investors to instead directly invest in overseas stocks, rather than going through a fund.

For example, if an investor buys 70 million won worth of Netflix stocks and reaps 20 million won in profit, they only need to pay a capital gains tax of 22 percent, or 3.85 million won.

Foreign equity funds, however, are taxed differently as profit is categorized as dividend income. If the investor made over 20 million won in financial income, they would have to pay up to 46.2 percent, or 9.24 million won in taxes, including local income tax.

The timing period of taxation is also problematic.

Funds are taxed not when they are sold, but during an annual settlement period. If there is profit, investors have to pay taxes every year.

However, paid taxes aren’t returned if the fund is sold during a period when it is at a loss.

Taxation based on the fund rather than the investor also presents an issue.

Considering an investor that has invested in two funds and seen 20 million won profit in one and 30 million won losses in another, the former is taxed while the latter is not.

In developed fund markets such as the United States and Japan, taxes are based on the investor.

“In the United States, losses are postponed to the next year or added to results in other financial products, and only those with profits are taxed to lower the tax burden on investors,” said Kim Young-jin, the head of the tax system support branch of Kofia.

“If tax benefits are increased on long-term funds, such as tax exemptions on insurance invested for more than 10 years, it will be helpful when preparing for retirement savings,” Cho added.