Korean stocks had a rough year after strong start in 2018

Korean stocks had a rough year after strong start in 2018 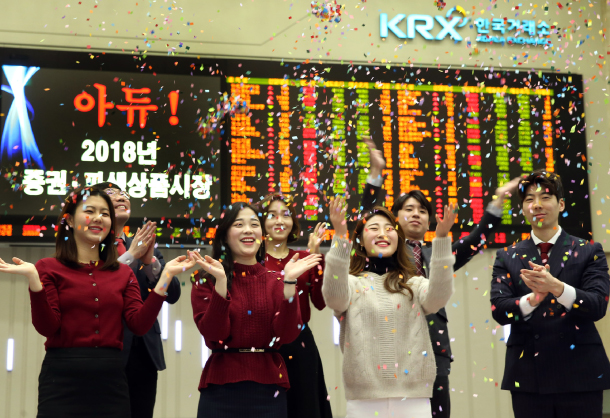 Employees of Korea Exchange celebrate the last trading day of the year on Friday at the office of the stock operator in Yeouido, western Seoul. [YONHAP]

The Kospi rose 0.62 percent to close at 2,041.04 last Friday, the final trading day of the year. It was the largest gain since Dec. 19 and followed days of extreme volatility, but it still left the index 17.3 percent down compared to the end of last year.

At the beginning of 2018 - January through February - a series of all-time highs were hit driven by sound corporate earnings. The Kospi peaked at 2,598.19 on Jan. 29.

Later in the year, both Korea and global economies faced serious headwinds, such as a trade dispute between the United States and China and investor anxiety over the pace of U.S. interest rate increases.

The factors weighed heavily on local export-oriented industries, including electronics and steel. 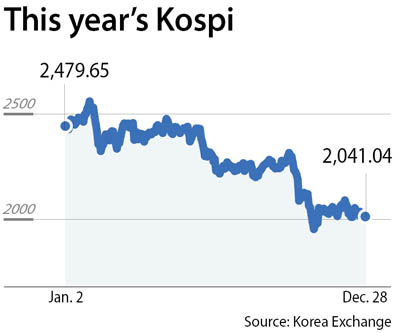 “The U.S.-China trade war, the Fed’s interest rate increases and worsening prospects for the global economy contributed to fall of the Kospi,” noted the Korea Exchange, operator of the stock markets, in a statement.

Faced with the unfavorable market conditions, the share prices of most listed companies contracted in 2018.

Among the 879 companies listed on the Kospi, only 252 managed to record gains during the year, while 626, or 71.2 percent, experienced a decline in their stock prices.

One of the biggest losers is Samsung Electronics, the country’s largest company. It lost 98 trillion won in market capitalization this year.

As for the coming year, analysts have mixed views on the prospects. A number of major institutions, including the International Monetary Fund (IMF) and the Bank of Korea, have revised down their 2019 economic forecasts.

But Min Byung-kyu, an analyst at Yuanta Securities, said that Korea can fare relatively well since the country is not as sensitive to the ongoing trade dispute as other economies.

“With the impact of the trade war, the weakening dollar, and oil prices stabilizing at lower levels, East Asian countries, including India, the Philippines, China and Korea, could perform well,” the analyst said.

Other analysts have a more conservative view.

“With 2019 just around the corner, the Kospi’s earnings per share is forecast to rise only 3.3 percent in 2019,” said Ted Oh, an analyst at NH Investment & Securities.