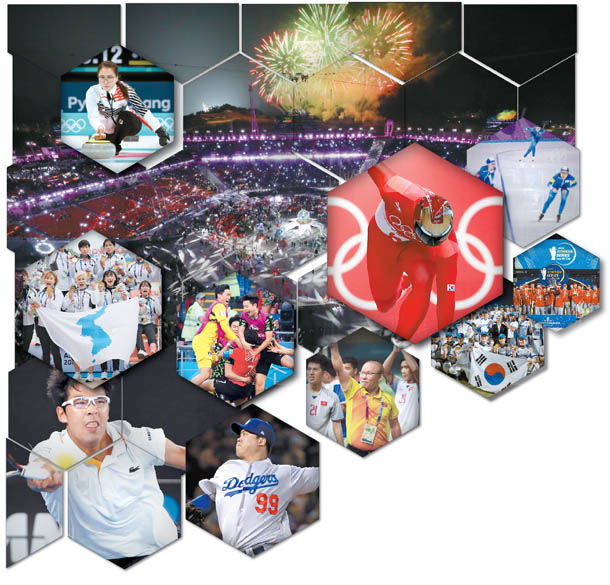 From the moment Chung Hyeon shocked the tennis world by defeating Novak Djokovic at the Australian Open in January to Park Hang-seo’s incredible success in Vietnam in December, Korean athletes and coaches have made their mark on sport around the world this year.

The Korea JoongAng Daily takes a look back at the biggest stories from a huge sporting year that began with the PyeongChang Olympics in February, saw Korea defeat Germany at the World Cup in June and the first foreign manager win the Korean Series in November.

The world tuned in to watch the 2018 PyeongChang Olympics and Paralympics in Pyeongchang and Gangneung in Gangwon at the start of the year. The Olympics kicked off on Feb. 9, with 92 nations competing for 102 gold medals over its two-week run. Norway topped the standing with 39 medals, while South Korea came in seventh with 17.

The Games opened with a ceremony that saw thousands of drones performing aerial acrobatics over the slopes of Pyeongchang and North and South Korea teaming up to carry the Olympic flame to the cauldron. U.S. snowboarder Chloe Kim and Korea’s Yun Sung-bin were two of breakout stars at the Games.

Korea failed to advance to the round of 16 at the FIFA World Cup in Russia but the fans were still celebrating from the country’s historic 2-0 victory over defending champion, Germany. Kim Young-gwon and Son Heung-min each scored a goal in the stoppage time to become the first Asian country to win against the defending champions at the World Cup.

It wasn’t just the Korean fans who were celebrating their victory. Mexican football fans, too, thanked the Korean football team in their win against Germany as they were able to advance to the round of 16 because Korea won against the defending champion.

The PyeongChang Olympics saw the return of inter-Korean teams to the international stage for the first time since 1991. The women’s ice hockey team at the Games may not have won any medals, but they were the first joint team in more than 20 years. Unified teams competed at the Asian Games, winning a gold medal in women’s dragon boat racing. The women’s basketball team won silver and the canoeing team took home two bronze medals.

Aside from international multisport events, an inter-Korean table tennis team also competed this year. The mixed doubles team of Jang Woo-jin and Cha Hyo-sim won gold at the Korea Open in July and silver at the ITTF Grand Final in December.

Chung Hyeon shocked the tennis world when he defeated world No. 1 Novak Djokovic at the Australian Open on Jan. 22. Chung went on to drop out of the competition in the semi-finals during a game against Roger Federer due to a foot injury, but the victory over Djokovic was enough to earn him a spot in the history books.

Despite injuries, Chung went from strength-to-strength throughout 2018, ending the year at No. 25 in the world, the highest-ranked Korean of all time. Chung, known as the professor, picked up fans all over the world with his distinctive glasses and self-effacing attitude.

Korea proved that it was more than just a nation of skaters at the PyeongChang Olympics in February, claiming its first-ever medals in a range of sports outside the ice rink. On the curling sheet, Team Kim took home the silver medal, becoming the first Korean team ever to medal in the sport and the first to reach a final in any international curling tournament.

The women’s speed skating team pursuit race at the Olympics made headlines for all the wrong reasons this year. Korean skaters Kim Bo-reum and Park Ji-woo were accused of abandoning teammate Noh Seon-yeong. After the race, Kim made some comments that appeared to be blaming Noh for the trio’s loss, and a huge scandal unfolded that saw more than 600,000 Koreans sign a petition asking for her to be banned from the team.

That wasn’t the only scandal to hit the Korea Skating Union this year. Short-track captain Shim Suk-hee was allegedly assaulted by her coach ahead of the Olympics and gold-medalist speed skater Lee Seung-hoon was accused of hitting younger teammates.


A big year for Ryu and Choo

Earlier in the season, Choo Shin-soo of the Texas Rangers went on an on-base streak for 52 games. Choo’s streak was not only the longest ever for a Korean player, but the longest among all active players in the MLB. At 52 games, Choo even surpassed Babe Ruth’s personal best of 51.

It was a magical year for the Vietnamese men’s football team under Korean head coach Park Hang-seo. The unlikely Cinderella story first started with Vietnam’s historic runner-up finish at the Asian Football Confederation U-23 Championship in January. Then at the Asian Games in August, Park proved that the team’s success wasn’t just luck. For the first time in Vietnamese history, the team advanced to the semifinals at the Asian Games, where they lost to Korea. To finish the year, Park led his team to win the Suzuki Cup in November.

Park has quickly become a fan favorite in Vietnam and has been named both Korea’s Person of the Year and Asian of the Year.

Korea had a disappointing year at the Asian Games, finishing in third place behind Japan. Korea finished with 49 gold, 59 silver and 70 bronze medals. Korea faced disappointment in some medal-favorite sports like archery and badminton, but the football and baseball teams still made headlines.

The football team became a global sensation after each match as Son Heung-min inched closer to his military service exemption. The baseball team ended the Games with a gold medal but little happiness, as fans turned on the team over accusations of an unfair player selection process.

The Doosan Bears may have walked away from the KBO’s longest ever season on top, but it was the SK Wyverns that emerged as champions. For the first time in eight years, the Wyverns won the 2018 Korean Series title with a series record of four wins and two losses.

Wyverns’ manager Trey Hillman became the first foreign manager to ever lead a team to a Korean Series title, although the victory was bittersweet, as the successful coach had already announced his resignation in order to return to the United States. The Wyverns also earned the less auspicious honor of being the first Korean Series champions ever to be shut out of the KBO’s Golden Glove awards.