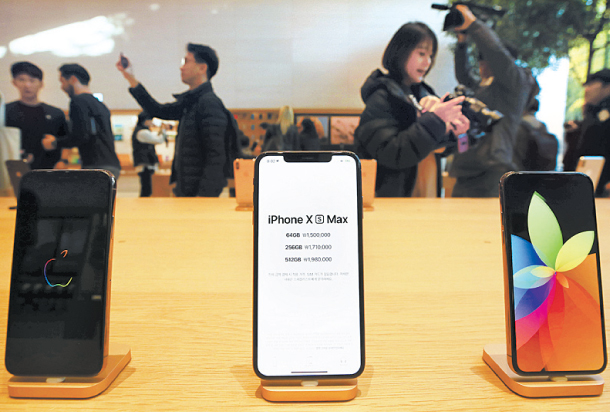 iPhone users are accusing Apple of paying Korean customers less for their trade-ins than the devices are worth, while noting differences between promotions in other countries and those in Korea.

If an iPhone owner wants to return an older model when buying a new device, iPhone Korea said it will offer up to a 300,000-won ($268.56) discount on the latest smartphones, the iPhone XS and iPhone XR.

They claim that the deal has been made available to them a full month later than in other countries. In the United States, Japan and China, trade-in opportunities started in late November. The amount in compensation is also said to be too low.

Apple Korea announced on Dec. 24 that it is taking iPhone trade-ins at its retail store in Garosugil, Seoul, and will continue to do so until late January next year.

Internet community Clien exploded with comments on Dec. 25, the day after the announcement. “I might as well sell it at the Gangbyeon Electronics Mart rather than returning it to Apple,” said one. Another added: “It is disrespecting the customers.”

While iPhone Korea only compensates up to 300,000 won for an iPhone 7+ released two years ago, the price for an iPhone 7+ in the second-hand market near Gangbyeon and Sindorim is around 380,000 won, according to mobile community Cetizen.

After typing in the serial number for a black iPhone 7 with 128 gigabytes into the trade-in page on Apple Korea’s website, a reporter received a quote of 174,000 won. In the second-hand market, users can sell the phone for at least at 289,000 won. Apple is offering 115,000 won less for the device.

Lee Doo-hee, a programmer who enjoys using Apple products said, “I can get more money if I sell directly, so I do not feel any need to go to the Apple store in person and exchange my iPhone.”

Apple U.S. announced that it is offering trade-ins of about $300 for those buying an iPhone XR and iPhone XS. This is about 10 percent more than in the Korean market.

“For Apple, Korea is the home turf for Samsung Electronics, Apple’s old enemy,” according to a source in the sector.

“Apple only has to get a fair amount of earnings from hard-core iPhone fans, which possibly account for 15 percent of all mobile communications users in Korea. That is why it is pursuing unfavorable policies, like excluding certain countries from promotions.”

It is believed that the current promotion from Apple Korea is due to the slump in sales of recent iPhones. High prices are seen as the main cause of the recent slowing of sales growth.

Kuo Ming-chi, a Taiwanese Apple expert as well as an analyst at TF International Securities, has revised his first-quarter 2019 sales volume estimate for iPhones from a 47 million to 52 million range to a 38 million to 42 million range.

A report written by Kuo was titled: “Shipments of iPhones in 2019 could be below 190 million.”

The market value of Apple exceeded one trillion dollars in September last year. It is now around $700 billion.