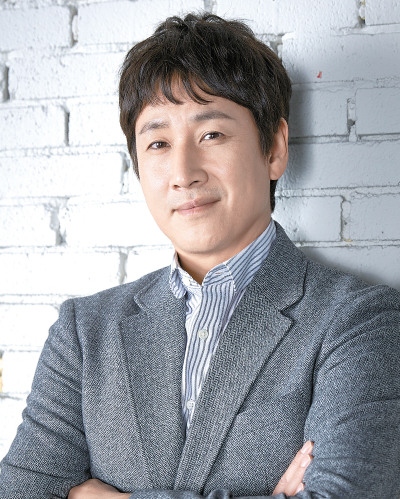 Actor Lee Sun-kyun describes his experiences during the production of the action flick “Take Point” during an interview at a cafe in Samcheong-dong, central Seoul, on Dec. 24. [HOHOHOBEACH]

This year was a turning point for actor Lee Sun-kyun. He took on two important roles: one in the tvN series “My Mister” and another in the film “Take Point,” which was released last Wednesday. Neither one of them is a romance.

Lee, usually known for his heartthrob roles in melodramas, decided to expand his acting range by trying out other types of roles.

“There’s a certain age range that the public wants [the characters to be in romance series],” he said during an interview with the press on Dec. 24 at a cafe in Samcheong-dong, central Seoul. “I’m past that age. I don’t know how the public thinks about sticking to a particular genre, but I think expanding one’s ranges is better for the public and for me. I think that I am changing.”

In the action flick “Take Point,” whose Korean title is translated as “PMC: The Bunker,” Lee plays the role of Yoon Ji-ui, an elite North Korean doctor. The film features a classified CIA operation to capture a high-profile North Korean official in a 30-meter (98-feet) deep bunker located under the surface of the demilitarized zone (DMZ). Captain Ahab (Ha Jung-woo) of the Private Military Company (PMC) takes charge of the operation, and, in the process, seeks help from Yoon, who has been taken hostage under the bunker.

One of the reasons Lee chose to take part in the film was because he wanted to work with Ha and the directors of the film.

“I had no reason to think that I should not participate in the film,” he said. “First off, I wanted to work with director Kim Byung-woo. I also wanted to act along with Ha. I am also classmates with the cinematographer, Kim Byeong-seo. We worked together on our graduation project.”

He added, “I knew that I would not get a chance later on if I missed this opportunity.”

Joining the team, however, was not an easy decision in the beginning. Director Kim Byung-woo and actor Ha previously worked together on the successful film “The Terror, LIVE” (2013).

“To be honest, I thought [at first], can I join this team? May I really join such a perfect team?”

Although Lee’s role is a relatively minor one, Lee said that he would not have joined otherwise.

“I would’ve refused to act in the film if I had more takes,” he said. “I joined the crew later [than other actors,] so I had to keep that in mind as well.”

He also added that “Ha plays the role of Captain Ahab, a character who has a traumatic past, faces continuous conflicts and makes difficult choices. Meanwhile, I play the role of Yoon, a clear-cut character who helps Ha in making hard decisions. I have no regrets about my character and its role in the film.”

Nevertheless, Lee’s role was not an easy one. He had to learn how to speak with a North Korean accent prior to the filming. He did act as a North Korean student in the film “Night and Day” (2007), but he only played a minor role, so that was not enough.

“I had a teacher [who taught me a North Korean dialect]. I repeatedly listened and studied recorded dialogue [spoken with North Korean accents].”

He worried that the public will not be satisfied with his dialect.

“I’m worried about how they will consider my accent,” he said. “That’s actually why I’m concerned about this movie more than any others. I myself feel uncomfortable about my North Korean accent.”

Lee often visited the filming site, even on days when he didn’t have anything to shoot, in order to practice his acting in advance.

“Some people say that I intentionally went to the site because I didn’t want to go home,” he said, laughing. “But [once again,] I joined the film crew late, so I wanted to familiarize myself [with the crew and the site]. Also, I had to watch Ha’s acting [and learn from him].”

When asked to describe his experiences filming with Ha, Lee said that it all worked out well. This was the first time the two acted together.

“The only connection I had with Ha was that he had worked with my wife [Jeon Hye-jin in the film “The Terror, LIVE”] before. We did have a lot of mutual friends though,” Lee said. “Many of my close friends in the film world were also close friends with Ha.”

Lee added, “The word ‘captain’ suits Ha. In real life, he is like a leader - like the boss of the neighborhood. He is optimistic and full of energy. Although I don’t like hanging around in groups, we share similar hobbies. I think that’s why we were able to work well together.

“In the recent premiere event, Ha and I wore similar [blue] coats. It was not intended, so it was quite surprising,” Lee said.