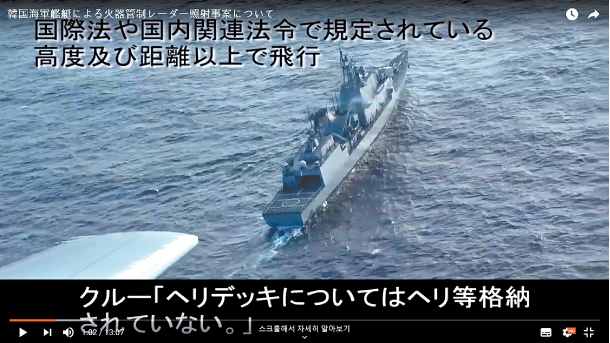 A screen grab from a video clip the Japan’s Defense Ministry released on YouTube last Friday. A patrol plane from the Japanese Maritime Self Defense Force filmed the video on Dec. 20, flying near Korea’s Gwanggaeto the Great class destroyer. [YONHAP]

South Korea ranked fifth on Japan’s latest list of countries Tokyo will seek security cooperation with over the next decade, a Japanese government source exclusively told the JoongAng Ilbo recently, three slots lower than the last ranking in 2013.

The change appears to reflect a deterioration in relations between the two countries.

According to a Japanese government source who spoke on the condition of anonymity, the Japanese government adopted its latest national defense plan on Dec. 18 and placed South Korea fifth in its security cooperation list after the United States, Australia, India and the Southeast Asian region in that order. Below South Korea were the United Kingdom, France and Canada, among others.

The defense plan essentially spells out that Tokyo, based on the U.S.-Japanese alliance, seeks to closely cooperate with countries that share the same universal values and security interests. On South Korea, the plan reads that Japan will advance defense cooperation in various fields and solidify the trilateral alliance of Tokyo-Washington-Seoul to maintain peace and security in the region.

With regards to Australia and India, the Japanese defense plan says Tokyo will try to hold more joint military exercises with those two countries through the so-called two-plus-two talks involving foreign and defense chiefs, as Australia and India are partners in Japan’s initiative to build a “free and open” Indo-Pacific.

Southeast Asian nations, in turn, are crucial because they are considered partners to deter unwanted actions by China, the Japanese defense plan continues.

The defense plan was adopted two days before the fire-control radar spat between Japan and South Korea, and weeks after the South Korean Supreme Court ruled Japanese companies must compensate Korean victims of forced labor during World War II.

Seoul-Tokyo relations took yet another dip over the past weekend when the Japanese government released 13 minutes of video footage that it claimed was proof that a South Korean warship locked its fire-control radar onto a Japanese patrol aircraft on Dec. 20 off Japan’s northeastern coast.

South Korea’s Ministry of National Defense protested the move on Friday and said the clip failed to support Tokyo’s claim that South Korea threatened the country - and suggested it was the other way around, that the Japanese aircraft threatened the South Korean warship by flying at a low altitude nearby.

Choi Hyun-soo, the South Korean Defense Ministry’s spokeswoman, said the South Korean Navy was trying to rescue a drifting North Korean boat that day in a normal operation, and that it did not aim its fire-control radar on a Japanese patrol plane in the process.

Japan’s video was released in at least two versions, one that had Japanese subtitles and another that featured English subtitles.

Ties remain strained between the neighboring countries even as the United States wants its two allies to be on good terms for its dealings with North Korea over denuclearization.

For the South Korean government, the timing of Japan’s video release last Friday was particularly irksome because both countries tried to iron out their differences on the spat just the day before in a working-level teleconference, though both sides refused to back down from their original stances.

In an English press release issued by Japan’s Ministry of Defense on Friday, Tokyo wrote that the footage was filmed by the Japanese fixed-wing patrol aircraft (P-1) of the Maritime Self Defense Force. In the video, said Tokyo, the South Korean Navy’s Gwanggaeto the Great class destroyer directed a fire-control radar at the Japanese aircraft “multiple times continuously over a certain period.” The P-1, in turn, was “flying at a certain altitude and distance safe enough from the destroyer.”

The P-1 made the call “Korea South Naval ship, hull number 971” three times in English in an attempt to confirm the intent of the radar action, the press release pointed out, to which the South Korean Navy did not respond. The Japanese Defense Ministry said some audio parts were cropped out for “information security.”

The Japanese patrol plane moves away from the Korean destroyer. A crewman says that the radar was continuously detected, at one point commenting, “The sound is so loud.” In parentheses, Tokyo’s Defense Ministry explained in subtitles that the radio field intensity was “terribly strong.” Further into the video, however, the Japanese pilot confirms that the South is not pointing a gun at his aircraft.

“Korean Naval ship, Korean Naval ship. Hull number 971. Hull number 971. This is Japan Navy. This is Japan Navy. We observed that your FC [fire-control] antenna is directed to us. What is the purpose of your act? Over,” the video shows a Japanese crewman asking in English over six similar transmissions, growing tense as the South Korean destroyer remains mum. On some occasions, a Japanese crewman calls, “Korean South Naval ship.”

The Associated Press cited Japanese Defense Minister Takeshi Iwaya as telling reporters Friday that his ministry decided to release the footage as objective evidence to allow people in and outside Japan to know that the Japanese Self-Defense Force operated appropriately.

Relations between Seoul and Tokyo have deteriorated since October and November when Korea’s Supreme Court ordered Japanese companies Nippon Steel & Sumitomo Metal and Mitsubishi Heavy Industries to compensate Korean victims of forced labor during World War II. The rulings have been vehemently protested by Tokyo.

Making matters worse, the South Korean government announced late last month that it would shut down a Japanese-funded foundation meant to support women forced to work as sex slaves in Japan’s military brothels during the war, effectively voiding a 2015 bilateral agreement that was supposed to solve the enduring comfort women issue. That also irked Tokyo, whose prime minister warned Seoul not to put bilateral relations at risk.