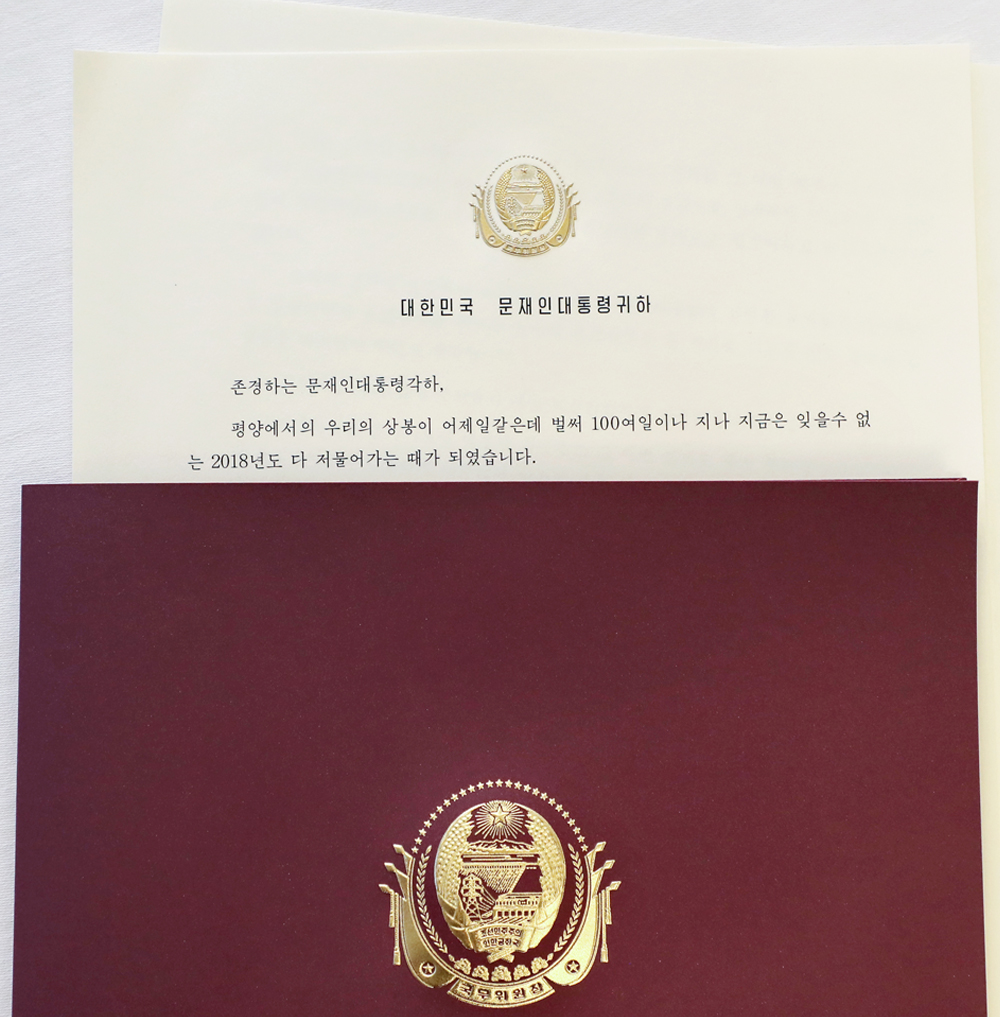 The Blue House released this photo of a letter and the cover that accompanied it from North Korean leader Kim Jong-un to South Korean President Moon Jae-in on Sunday. [YONHAP]

South Korean President Moon Jae-in received on Sunday a New Year’s greetings letter from North Korean leader Kim Jong-un in which Kim conveyed his regrets for not making it to Seoul within the year and his hopes to continue peaceful cooperation between the two Koreas next year.

“With the New Year just coming up, Chairman Kim Jong-un sent a letter that said our people have become free from the threats of war and have entered an irreversible relationship of reconciliation and trust,” Moon wrote on his Facebook account on Sunday evening. “[Kim] also clarified his active will to carry out the agreements from the South-North and North-U.S. summits.”

Moon added that he is very happy that Kim is interested in “meeting as often in the new year to work together for peaceful development and denuclearization.”

It was the first time a letter from a North Korean leader to a South Korean president was publicized here.

Moon uploaded on his account a photo of the letter, which was taken in a way to only show its first line.

“Dear honorable President Moon Jae-in, our reunion in Pyongyang around 100 days ago feels like it happened only yesterday,” it said. “And now we are reaching the end of year 2018, which has been an unforgettable year.”

Moon and Kim met in an historic summit in April for the first time. They met twice more throughout the year, a record number of inter-Korean summits. “Kim emphasized that the two leaders met three times in the year to take real and daring measures beyond what have long been confrontational relations between the South and the North,” Blue House spokesperson Kim Eui-kyeom said in a press briefing at the Blue House, about an hour and half before Moon posted the letter.

The spokesperson said he was conveying the paraphrased contents of the letter.

“He [Kim Jong-un] emphasized that these measures have helped our people become free from the threats of military tensions and fears about war,” Kim said. “Kim also said that he was hoping to visit Seoul this year, as they had agreed in their meeting in Pyongyang, and that he regretted it couldn’t happen within the year. He, however, emphasized his strong will to visit Seoul in the future, depending on the circumstances.”

Spokesman Kim said that the letter was delivered through “one of many channels of communications between the South and the North,” and that he could not specify which one was used. He added that Moon will likely “reply soon” to the letter, which he said was two pages long.