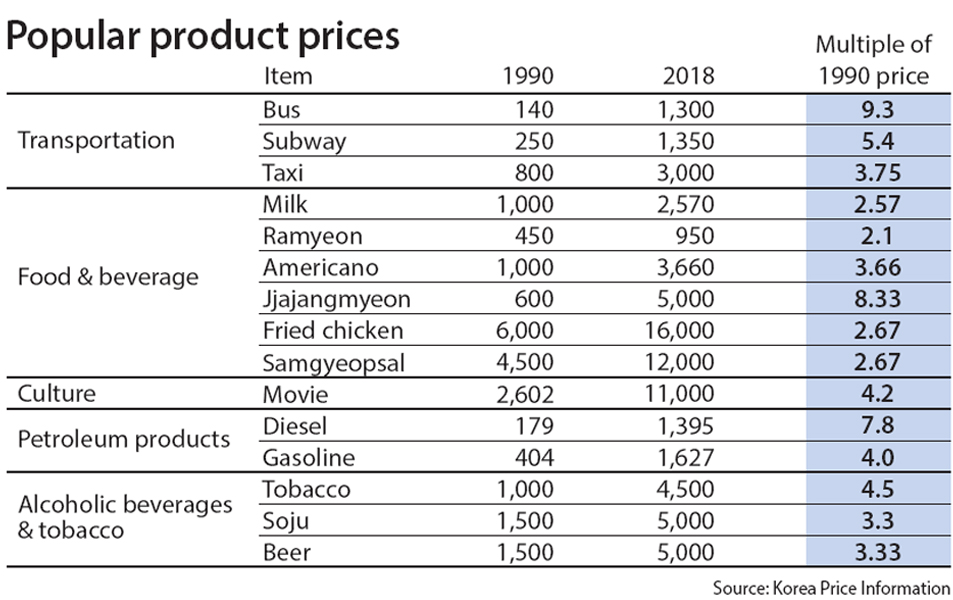 People nationwide have been affected by the persistent rise in prices, but working individuals appear to have suffered more over the past decades due to the steep increases in the cost of goods and services essential in their daily lives.

About 60 percent of goods and services most used by workers have risen faster than the rate of inflation over the past 30 years, according to an analysis commissioned by the JoongAng Ilbo and conducted by the Korea Price Information (KPI), a price research agency.

The agency selected 15 goods and services that are closely linked with the lives of workers - including transportation fares, food and beverages - out of the 460 items surveyed for the country’s consumer price index.

It found that the prices of 60 percent of the oft-used or utilized items rose faster than the average inflation rate between 1990 and 2018.

Jjajangmyeon, Korean-style Chinese black noodles, came in second, with average prices rising from 600 won to 5,000 won. The rise is primarily attributed to the rise in the price of flour, the main ingredient in the making of the noodle, the agency said, adding that wheat production will further decline this year.

Third place is taken by diesel fuel, which jumped from 179 won in 1990 to 1,395 won in 2018. But the price will likely remain flat or lower as a result of temporary measures to lower oil prices. The government announced a cut in the tax on transport fuel earlier in 2018, lowering the tax on diesel from 529 won per liter to 450 won.

A hypothetical office worker who smokes spends about 346,720 won a month, but the worker would lead a rather modest existence with that budget. If anything extra is added, such as soju or samgyeopsal (grilled pork belly), the cost of living quickly goes above 400,000 won.

Lee Dong-hoon, the KPI survey leader, said that the report could provide meaningful insight into the lives of workers.

“So far, there has been no information specifically dealing with working people, although they account for 30 percent of the entire population,” Lee said.

The steep rise in the prices of the items in question has a direct impact on quality of life.

The misery index, which measures the economic condition of the average person in an economy, hit a seven-year high in October at 5.5, the highest since October 2011. The higher the index, the greater the misery felt. The index is equal to the sum of the inflation rate and the unemployment rate.

This year won’t be easy, mainly because of the higher minimum wage and the increase in the prices of utilities and transportation. The Seoul city government has announced its plan to raise water prices and the basic fare for taxis.

Experts express concern that the higher minimum wage could translate into rising labor costs and prices of goods and services.

“To offset the impact of price rises, the government could push [the central bank] to lower interest rates, but that is also tricky because of the rising rate gap with the United States,” said Cho Jae-ho, economics professor at University of Ulsan.

“There are not many options left for the government to boost domestic consumption,” the professor said.